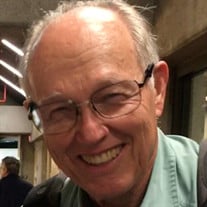 Gary was born in St. Helena, California and grew up in Yountville and Napa. He was always delighted to boast he was from the famous Napa Valley. Gary, the only child of Gino (also written Genio) and Ruth Parkinson Massoni, was also proud of his Italian heritage. Although his paternal grandparents, who immigrated from Tuscany to San Francisco, died before he was born, his early memories included exuberant gatherings with the extended Italian side of the family where Italian was spoken and an uncle was in the back room singing opera. During Gary's college years he began to think deeply about what he believed. After graduating from Stanford University, he married Betty Herndon and they headed to Chicago where he attended Chicago Theological Seminary, although not at all sure where this education would lead. The very first people they met in Chicago were Jesse Jackson and his wife, Jackie. This meeting began a friendship and direction that was woven throughout the rest of Gary's life. That winter Jesse organized a group including Gary to go to Selma, Alabama, in response to Dr. Martin Luther King's call for people to support the drive for voting rights and the marchers who had been beaten on Bloody Sunday. The next year Gary began working with Operation Breadbasket, the Chicago based program which SCLC, Dr. King's organization, had asked Jesse Jackson to lead. Gary continued to work with Breadbasket on issues of economic justice as well as finally earning his seminary degree in 1971. Being in the Lorraine Motel in 1968 and hearing the shot when Dr. King was assassinated always haunted Gary. After leaving Chicago, Gary was ordained by the Disciples of Christ and worked on social justice issues for a group of churches in Stockton, California. He then became Director of Programs for the Southwest region of the American Friends Service Committee in Pasadena, California. Justice for farmworkers and peace in Palestine and Israel were probably the issues closest to his heart during that time. In 1985 Gary and his family moved to Corvallis for him to work as a campus minister at Westminster House at OSU. While there he particularly enjoyed teaching classes in the Honors College. In 1987 Rev. Jackson asked Gary to be the Director of Scheduling for his 1988 Presidential Campaign. A whirlwind year plus followed. Looking back Gary would joke that during that year he was the second most popular man in the country because so many people wanted Rev. Jackson to speak at an event, but to make that happen they had to deal with Gary. Gary returned from the campaign to Westminster House. After a few years he was drawn back to work with Rev. Jackson's organization, the Rainbow Coalition. He continued to work with Rainbow and later Rainbow-PUSH until he retired, holding a variety of job titles and responsibilities as Rev. Jackson took advantage of Gary's flexibility and ability to learn whatever he needed to get the work done. Gary also continued his concern for peace in Palestine and Israel. He divided his time between Chicago and working remotely from Corvallis. Despite his intense work life, he was always devoted to his family, sharing much time, love and laughter doing things with Betty, their daughters, Gina and Dara, and more recently their grandchildren, Kai, Rowan and Rose. Gary also loved photography, travel, mountain streams, and all kinds of music, especially Hawaiian slack key guitar. He was particularly proud of a project where he and Betty used his photography to create panels for a museum show by Vida Nueva, a women's weaving cooperative from Oaxaca, Mexico. Gary had been healthy until he was suddenly sick and spent a month in the hospital. At the end doctors found the acute myeloid leukemia that killed him. Left grieving are wife Betty; daughter Gina and her husband Roger Marchand, daughter Dara Massoni, and her spouse Chere Taylor; grandchildren Rose Marchand, and Rowan and Kai Massoni, and a host of friends. His death leaves a huge hole in our lives. There will be a celebration of Gary's life January 18, at 2 p.m. at First Congregational Church, 4515 SW West Hills Road, Corvallis. Messages for the family may be left on Gary's page at the McHenry Funeral Home, Corvallis. If you wish to make a contribution in Gary's honor, please consider Rainbow-PUSH, Chicago, or First Congregational Church, Corvallis. https://www.corvallisucc.org/

Gary was born in St. Helena, California and grew up in Yountville and Napa. He was always delighted to boast he was from the famous Napa Valley. Gary, the only child of Gino (also written Genio) and Ruth Parkinson Massoni, was also proud of... View Obituary & Service Information

The family of Gary Massoni created this Life Tributes page to make it easy to share your memories.

Gary was born in St. Helena, California and grew up in Yountville...