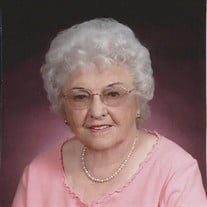 Wilma Christine Coffee Toevs lived an amazing 35,642 days (97 years) until heaven called. Born in Hoenwald, TN she soon moved to Detroit, MI. Following high school, her first job was at J.L. Hudson's department store selling pretty things; silk stockings, gloves, ladies scarves and handkerchiefs. WWII led her to join the Women's Army Corps. Wilma was stationed at Cape Cod, MA working rehab with returning wounded (yet flirty) soldiers. While there, she met her future husband Alden, on a blind date. A short three weeks later the war ended and she had a ring on her finger! Their wedding, June 22nd, 1946 in Detroit, was followed by a road trip to Aberdeen, ID, Alden's little hometown. It was nothing short of total culture shock. Her three children were born in Aberdeen; Alden Jr. in 1949, Cynthia in 1951, and Marcia in 1952. They also lived in Blackfoot and Pocatello, ID before moving to Corvallis in 1965 when Alden became President and CEO of Citizen's Bank. Wilma's memberships at Corvallis Country Club, First Baptist Church, PEO Chapter S and many bridge groups created wonderful lasting friendships. Cooking and entertaining for family and friends was Wilma's lifelong delight. Her cookbook collection grew to thousands. Ever on the lookout for an estate sale or antique shop, she found beautiful sets of china, crystal, teacups and teapots, and furniture for her home. Wilma's fondness for the lovely things led her to open Wilma Christine's Diamond Shop in 1978 in downtown Corvallis. After Alden passed in 1994, she continued her yearly trips to Kauai and also enjoyed some big adventures. A Rogue River whitewater rafting trip for her 80th birthday - she loved it -, a trip to Australia to visit her son, an Alaskan cruise and grandchildren's weddings made her very well traveled. She loved it all! Wilma's last few years were spent at Willamette Springs and we thank them for their kindness. Also thanks to Lumina Hospice for wonderful care in her final weeks. A contribution to Lumina in her name is welcome. Wilma is survived by her son Alden L. Toevs Jr. (Judi Wolf), and daughters Cynthia Brown and Marcia (Gene) Harder. She was a much loved "Nonnie" to 13 grandchildren and spouses along with 25 great grandchildren. She is also survived by her sister Marcia Bone, sister-in-law Irene Thomas, as well as many loving nieces and nephews. She was preceded in death by her husband of 48 years, Alden L. Toevs, parents Robert and Georgia Coffee, two brothers and two sisters. The entire family sends a special loving thanks to granddaughter Anna Harder for 8 years of devoted companionship and care. Services will be held at 2:00 PM on Friday, March 6, 2020 at McHenry Funeral Home Chapel in Corvallis. A contribution to Lumina Hospice in her name is welcome.

The family of Wilma Christine Coffee Toevs created this Life Tributes page to make it easy to share your memories.