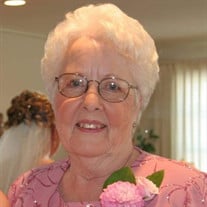 Wilma Spees Schmidt passed away peacefully at home, surrounded by her family, on June 16th. Wilma lived a very full life to the age of 91. She was born April 10, 1930 in Quinter, Kansas to parents Goldie and Klonie Hilburn of Hoxie, Kansas. When she was nine, her parents packed up six kids and moved to the Kings Valley area in Oregon. She attended school in Kings Valley. She met Earl Spees, a friend of her brother, and was smitten. After they got married, they lived in Kings Valley and had daughter Cheryl. They later moved to Corvallis where daughter Linda was born. After their nest was empty, they moved to Philomath. Wilma was a housewife most of her life. She worked at the Highland View and Corvallis High School cafeterias for a few years. She had many hobbies including, knitting, crocheting, quilting, and needlepoint. She loved doing her crossword, word search, and jigsaw puzzles. She was also a big OSU Beaver fan. She made sure her Beaver flag was out on game day. She and Earl enjoyed fishing, camping, and traveling. After Earl passed away, she married Walt Schmidt. They spent nine happy years together gardening, traveling, and taking cruises. Wherever life took Wilma, she was always close to her family, neighbors, and friends, always with her lighthearted smile. Wilma is preceded in death by her husbands Earl and Walt, her parents, and brothers Jack, Jerry, and Tom, and sister Bonita Burbank. She is survived by her daughters Cheryl Marshall (Larry) and Linda Kline (Stan), grandchildren Kim Brown (Jeff), Todd Marshall (Jenn), five great-grandchildren Kai and Tristan Brown, and Zoe, Ryan, and Lily Marshall, sisters Patsy Farstad and Wanda Comer, and several nieces and nephews. A memorial service will be held at 11:00, Saturday June 26th at the Zion Lutheran Church in Corvallis, Oregon. A private burial will be held Friday June 25th. Donations can be made to Lumina Hospice or the Zion Lutheran Church in Wilma’s name.

Wilma Spees Schmidt passed away peacefully at home, surrounded by her family, on June 16th. Wilma lived a very full life to the age of 91. She was born April 10, 1930 in Quinter, Kansas to parents Goldie and Klonie Hilburn of Hoxie, Kansas.... View Obituary & Service Information

The family of Wilma Louise Schmidt created this Life Tributes page to make it easy to share your memories.