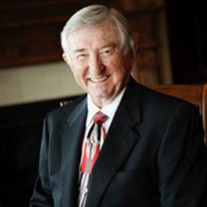 William E. Sandine, resident of Allen, Texas, died Wednesday morning, November 28, 2018, at the age of 90. He loved God, his family, and his many friends. William was a member of the Church of Christ for 51 years, and he had a great passion for microbiology and golf. We will all remember his laughter and smile. William graduated from Roosevelt High School in 1946. He received a Bachelor of Science degree in Dairy Industry from Iowa State University in 1951. William served his nation in the United Sates Air Force stationed at the Headquarters of the Thirty Second Air Division in Newberg, New York. After honorably completing his service, he received a Masters of Science degree in Dairy Science from North Carolina State University in 1955 and a Doctor of Philosophy degree in Food Microbiology from Oregon State University in 1958. William was invited to join the Microbiology faculty at Oregon State University where he served for 35 years becoming a distinguished, full professor before retiring in 1996. William was an accomplished microbiologist. We remember the countless hours he spent in the lab because he loved research. He was president of the American Diary Science Association in 1994 and a member of the American Society for Microbiology, the Society for Industrial Microbiology, and the Institute of Food Technology. In 2007, William was honored as an Alumnus Fellow by the Oregon State University Alumni Foundation for outstanding achievements and contributions to society. Among his countless awards and honors, he received the ADSA Dairy Research Foundation Award, the USDA Award of Honor, the ITF Industrial Achievement Award, and the American Society for Microbiology. He was also awarded an honorary doctorate from Tucuman University in Argentina. William supervised 40 Masters and 38 Ph.D. degree students, authored over 200 publications, and garnered 22 patents important for dairy science. William and Susan moved to Southern California in 1996 after retiring and later moved to the Dallas, Texas, area in 2006. During retirement, he played a lot of golf, enjoyed his family, was active in church, drove his Model A, hunted for antiques, traveled, and was an active member in Rotary serving humanitarian efforts. William is survived by his wife, Susan; his four children, Brian and his wife, TaLyna, of San Leandro, California, Todd and his wife, Gina, of Oregon City, Oregon, Kimberly and her husband, David Sutton, of Garland, Texas, and Renae of Allen, Texas; his four grandchildren, Britta and Bryn Sandine of San Leandroh California, Olivia and Connor Sutton of Garlandh Texas; and niece, Jackie Kail of Des Moines, Iowa. He was preceded in death by his father, Ewald William Sandine, his mother, Ferne Merryman Sandine, and his sister, Jewel Lane. A memorial service will be held at McDermott Road Church of Christ on Thursday, December 6, 2018, at 11:00 a.m., 3600 McDermott Road, Plano, Texas 75025. The family asks that donations be made to the "Onstead Scholars Program Scholarship" and mailed to Gift Records, Abilene Christian University, ACU Box 29132, Abilene, Texas 79699-9132. Donations may also be made online at www.acu.edu/give specifying that it is for the Onstead Scholars Program Scholarship in William Sandine's memory. If you have any questions, please call Gift Records at (325) 674-2612. The family will be at home at 1065 Big Spring, Allen, Texas 75013.

William E. Sandine, resident of Allen, Texas, died Wednesday morning, November 28, 2018, at the age of 90. He loved God, his family, and his many friends. William was a member of the Church of Christ for 51 years, and he had a great passion... View Obituary & Service Information

The family of William E. Sandine created this Life Tributes page to make it easy to share your memories.