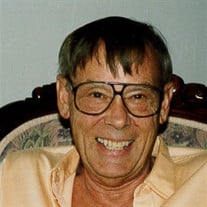 William C. Reiman February 19, 1927 – December 30, 2018 Being a man who loved a good adventure, William (Bill) Reiman passed from this earth on December 30th to set out on his next journey. He filled his 91 years with his love for fishing, hunting, creating art and family. Some of his happiest days were spent exploring and fishing lakes and rivers from Oregon to the Copper River Delta of Alaska, combing the Arizona desert in search of interesting rocks and panning for gold (and drinking a lot of beer) in Eastern Oregon with lifelong friend Dick Edmundson. Over the years, he made beautiful jewelry, sculptures and paintings. Born in Rosalia, Washington to Ervin & Helen Reiman, he moved to Corvallis at the age of 7. He attended Roosevelt Grade School, Corvallis Jr. High and Corvallis High School, where he was a 3-sport letterman and Vice President of the student body. At the age of 17, he left high school to join the Navy during World War II, where he was a coxswain on a landing craft in the Navy’s Amphibian Forces. After his assignment in the Navy was fulfilled, he returned to Corvallis and attended Oregon State, graduating in 1950 with a bachelor’s degree in Science. While at OSU, he played football for the Beavers, was a member of the Sigma Phi Epsilon fraternity and, most importantly, met the love of his life, June Nesselrod. He and June were married on September 30, 1950. They settled down in Corvallis and raised 2 daughters. Bill’s professional life started as co-owner of Modern Freezing & Storage, where he later became CEO and changed the name to Corvallis Frozen Foods, which became one of the largest frozen food distributers in the Northwest. He was active in the Corvallis Rotary Club for 33 years as well as a member of the Corvallis Country Club and the Elks Club. In 1988, wanderlust hit Bill and he and June moved to Waldport. A short 4 years later, they were off to Oro Valley, Arizona, where Bill could not get enough of hiking through the desert. They made some wonderful friends there and had some of the most relaxing years of their life together. By 2006, they were ready to be closer to family and old friends again and returned to Corvallis. Bill was a loving husband, an amazing father and a loyal friend. He was a gifted artist and natural entrepreneur. He was generous. Sitting still for long or suppressing his opinions, however, were not strengths he was known for. We will miss it all very much. Bill is survived by his wife, June, his daughters Lynn (and Jack) Hopkins, Nancy (and Tom) Davies, 6 grandchildren and 11 great grandchildren. He is preceded in death by his parents, sister Betty Locey, brother Bob Reiman and grandson Brett Davies. In lieu of flowers, the family suggests that you remember Bill’s sense of adventure and creative spirit by donating to the charity of your choice that encourages these qualities in others. A family graveside service will be held at a later date. McHenry Funeral Home is handling arrangements.

William C. Reiman February 19, 1927 &#8211; December 30, 2018 Being a man who loved a good adventure, William (Bill) Reiman passed from this earth on December 30th to set out on his next journey. He filled his 91 years with his love for fishing,... View Obituary & Service Information

The family of William C. Reiman created this Life Tributes page to make it easy to share your memories.