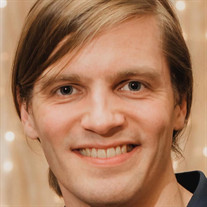 William Clark Koski was born in Portland, Oregon on December 5, 1986 to Kent and Mary Anne Koski. He was the long-awaited little boy after a big brother, then six girls in a row. As if he didn’t have enough sisters already, he got a darling new one three years later. Those two went through childhood together as buddies. Bill was always brilliant, and thanks to his six extra moms he learned his alphabet and how to sound out words years before kindergarten. He spent childhood days picking blackberries next to the house and drinking lots and lots of milk. He attended Palisades Elementary, Waluga Junior High and Lakeridge High School. He was well loved and high-achieving. Many of the friends he made in high school became his traveling companions who would crisscross the United States with him in later years on epic road trips. Bill had a scientific mind from the very beginning, and loved building and creating things from Legos to intricate home theaters and sound systems, to the infamous watermelon bomb. Bill attended Oregon State University where he received both his Bachelor’s and Master’s degrees in Mechanical Engineering, graduating at the top of his class each time. After three internships in college, he was hired by NuScale Power to help engineer their small scale nuclear power plants. He couldn’t believe he was getting paid to do math! Once NuScale was far enough along in the computer design process, he was assigned to be the project manager over building their first three-dimensional full-scale model. Bill was so good at explaining the model to future buyers that he spent much of his time giving tours of the complicated structure. He was so handsome that they photographed him and used his face in their ads, brochures and on their website. His colleagues described him as a straight shooter, intelligent, articulate, and always up for a good-natured debate. Bill found joy in life and it rubbed off on those around him. Bill was a next-level Blazer fan. He admitted he couldn’t actually comprehend or take seriously the idea of leaving Oregon because he couldn’t imagine not being at their games. He was also a passionate fan of his Oregon State Beavers. Go Beavs! Bill and Kalie Crangle made commitments to be Life Partners and referred to each other as such. Together they fostered many litters of kittens, providing an abundance of love, snuggles, and great futures. He assisted her in her animal rescue adventures, and she taught him the importance of speaking nicely to houseplants. In their life together, Bill and Kalie did a lot of traveling to see family. Bill loved nothing more than Christmas time, especially when he could watch his nieces and nephews tear open presents. He loved them so much and embodied the fun and crazy uncle persona. Bill and Kalie enjoyed selecting a house and designing the inside together. Bill made sure to pick out a plan that would accommodate their love of fostering kittens and their desire to foster kids together one day. They filled this home with his amazing built in home theater speakers, kittens, houseplants and their love. In his final weeks, Bill suffered with anxiety and depression and passed away in his home in Corvallis, Oregon on November 16, 2020. He is preceded in death by his dear sister, Elizabeth (Liza) and his sister-in-law, Jennifer (Poff) Koski. He will be deeply missed by his partner Kalie Crangle, his parents Kent Emil and Mary Anne (Clark), his siblings Steve, Maryjane Wilson (Rich), Sarah Norton (Bill), Anne Koski (Ben), Emily Harrington (Mark), Katie Stewart (Daniel), Dorothy Winters (Kole) and 36 adoring nieces and nephews. A memorial service will be held at the McHenry Funeral Home in Corvallis on Monday, November 23 at 11:00 a.m. Due to the pandemic, it will be closed to the public, but can be viewed on Facebook Live at the following link: https://www.facebook.com/events/1012209239190597

William Clark Koski was born in Portland, Oregon on December 5, 1986 to Kent and Mary Anne Koski. He was the long-awaited little boy after a big brother, then six girls in a row. As if he didn&#8217;t have enough sisters already, he got a... View Obituary & Service Information

The family of William Clark Koski created this Life Tributes page to make it easy to share your memories.

William Clark Koski was born in Portland, Oregon on December...