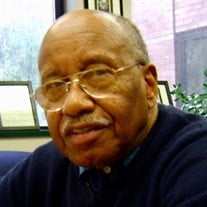 Dr. Wilbert Gamble passed away peacefully on April 16, 2019, at the age of 86, after a courageous battle with dementia and cancer. He was born in Greenville, Alabama, the son of Laymon Gamble and Clara May Cobb, moving with family soon after to Flint, Michigan. Wil attended Wayne State University in Detroit, Michigan earning his Bachelor’s and PhD degrees in Chemistry and also a Doctorate of Philosophy. At Wayne State, he became a member of the Alpha Beta Chapter of Kappa Alpha Psi. In 1957 he married Zeferene “Zet” Tucker and later moved to Ithaca, New York, where he held a Postdoctoral appointment in Chemistry at Cornell University. In 1962, Wil and Zet Gamble moved to Corvallis where he was an OSU Professor of Biochemistry/Biophysics until his retirement in 1997. Wil, Zet and their daughter Priscilla Milton moved to Philadelphia for his work at the University of Pennsylvania in the Chemistry Department; he won a Fulbright Fellowship to teach one year in Kumasi, Ghana, at the Kwame Nkrumah University of Science and Technology, and spent three sabbatical years working on scientific research for the National Institute of Health in Bethesda, Maryland. A passionate, committed community activist, Wil was a member of the NAACP, Oregon Assembly of Black Affairs, Kiwanis, and served as an Advisor to the Black Student Union, assisting students, staff and community members in establishing the Lonnie B. Harris Black Cultural Center in 1975. Wil also served one year as Chairman of the OSU Athletic Board and was a Meals on Wheels volunteer. He was a member of First Baptist Church. With his family, Wil enjoyed traveling around the world through Europe, Asia and Africa, having friends in all places. Over the years he mentored and supported many students, family members and friends, believing in the importance of giving. Loving music, he frequently attended music festivals, and concerts. Upon retirement he learned to play the euphonium. Wil is preceded in death by his wife, Zet; brother, Willie Cobb Jr.; father, mother, stepmother, Annie Gamble, and stepfather, Willie J. Cobb Sr. He is survived by his daughter, Priscilla Milton (Gary); grandchildren, Derek Milton (Emily), Maya Milton, and Sorrell Milton; sisters, Betty Loving, Catherine Lewis (Welton), Vivian Elliott (Jim); and numerous nieces, nephews and extended family. A celebration of Wil’s life will be held from 3:00 pm to 5:00 pm on Wednesday, June 5th at McHenry Funeral Home Chapel in Corvallis. In lieu of flowers, please consider a donation to the American Cancer Society, www.cancer.org.

Dr. Wilbert Gamble passed away peacefully on April 16, 2019, at the age of 86, after a courageous battle with dementia and cancer. He was born in Greenville, Alabama, the son of Laymon Gamble and Clara May Cobb, moving with family soon after... View Obituary & Service Information

The family of Dr. Wilbert Gamble created this Life Tributes page to make it easy to share your memories.