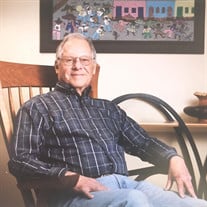 Walter Curtis Johnson Jr. died in his home on Wednesday, July 28, 2021 at the age of 82. Curtis was born the first child of Walter Curtis Johnson and Carolyn (Shirk) Johnson on February 11, 1939 in Princeton, New Jersey where his father was a professor of Electrical Engineering at Princeton University and his mother was a high school English teacher. Curtis was proud of the fact that, at the time of his attendance, Princeton High School was one of the first public schools in the country to integrate. He claimed that Princeton High was so good, that his subsequent years at Yale University were made easy. His time in the Boy Scouts became an important part of his identity, a mindset he passed on to his son, and he was proud to earn the rank of Eagle Scout. He fell in love with the American West when his scout troop took a train across the country to attend Philmont Scout Ranch in New Mexico. He promised himself that he would one day return to the West. Curtis met his wife, Susan Scheller, at a Yale Outing Club event; their first date was an Outing Club spelunking expedition. The Outing Club also sparked a lifelong love of skiing. Curtis married Susan in 1960 and graduated from Yale a year later with a bachelor’s degree in Chemistry. They followed his dream by putting all their belongings into a Volkswagen Beetle and heading west. Initially they settled in Seattle where Curtis earned a PhD in Physical Chemistry at the University of Washington and discovered a love of mountain climbing. Postdoctoral studies took Curtis and Susan to the University of Oregon and then to the University of California in Berkeley. Along the way their son, Walter Curtis Johnson III was born in Eugene, Oregon, and their daughter, Heather Lynn Johnson, was born in Oakland, California. During this time in Oakland Curtis started a passion that would consume his “spare” time forever afterward: woodworking. He built a beautiful dining table that is still used every day. This passion made him an unusual scientist, with interests outside of the lab. Accepting an invitation to join the Department of Biochemistry and Biophysics at Oregon State University, Curtis moved his young family to Corvallis, Oregon in 1968. They built a house in the hills just west of Corvallis where they have lived ever since. The university granted Curtis tenure in 1972 and he spent the next 24 years as a Professor and highly published researcher. His work included fundamental contributions that helped lay the foundation for our current understanding of DNA and other biological molecules by analyzing their shapes using Circular Dichroism Spectroscopy. Curtis always focused on his family, including taking them on innumerable camping trips to many venues: across Oregon, across the West, and across the United States. Two particular highlights were raft trips down the Grand Canyon in 1979 and 1986. After the ‘nest was empty’, he and Susan travel extensively around the world, first to places to which he had been invited to share his research, such as Florence, Italy, and later, further afield, to places such as Angkor Wat and Machu Pichu. Throughout, he continued his love affair with woodworking, exhibiting and selling in galleries and filling his home with elegant pieces of original furniture. Curtis also purchased and personally maintained a number of classic cars that he had coveted in his youth: a ’53 MG TD, a ’57 Ford Thunderbird, and a ’67 Jaguar XKE. He was such a good mechanic that the English cars are actually reliable. As his vision declined he learned a new hobby, hammering copper sheets into beautiful copper vessels. Curtis was always driven to remain creative. Curtis is survived by his wife of 61 years, Susan Johnson, and their two children, Heather Lynn Kier and Walter Johnson, two brothers who he adored, Bill and David, five grandchildren, and three great grandchildren. We are only learning how to survive without him; we miss you dearly husband, father, brother, grandpa. In lieu of flowers, donations may be made to The Corvallis Arts Center, 700 SW Madison Ave., Corvallis, OR 97333. Details of the memorial will be communicated when they become available.

Walter Curtis Johnson Jr. died in his home on Wednesday, July 28, 2021 at the age of 82. Curtis was born the first child of Walter Curtis Johnson and Carolyn (Shirk) Johnson on February 11, 1939 in Princeton, New Jersey where his father was... View Obituary & Service Information

The family of Walter Curtis Johnson Jr. created this Life Tributes page to make it easy to share your memories.