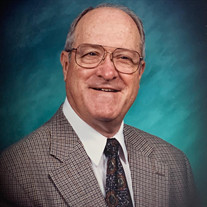 W. Harold Hunter of Corvallis, Oregon, passed away on January 21, 2020, at the age of 92. His wife Charlene and son Jason were by his side. Harold was known for his compassion, wisdom, and wit. He was born in Maryville, Tennessee, on February 19, 1927, to Edwin Ray and Elva Grace (Watkins) Hunter. He graduated from Maryville High School and received a Bachelor’s Degree from Maryville College. He then earned an M.A. in English Literature from the University of Tennessee and a Master of Divinity from Princeton Theological Seminary in 1954. On June 3, 1950, he married Barbara Bertholf. They had two children, Kim Alison and Kris Alan. They later divorced. Harold served as a Presbyterian minister for 25 years in churches in Niagara Falls, Binghamton, Poughkeepsie, and Wappingers Falls (all in New York), Long Branch, New Jersey, as well as Knoxville, Tennessee, where he worked to desegregate the church. He was known for thoughtful and inspiring sermons. He chaired several Presbytery and Synod committees and served as General Assembly commissioner in 1959 and 1973. After leaving the ministry, Harold became a development officer for Wartburg College in Waverly, Iowa. In Waverly he met Charlene Sale, and they were married on December 20, 1980. A year later he adopted her son, Jason Charles Sale. In 1988 he became director of development for the College of Liberal Arts at Oregon State University. He enjoyed his work at OSU and stayed a supporter of the College of Liberal Arts and OSU sports after he retired in 1992. He was a lifelong fan of the St Louis Cardinals, was involved in many community activities like United Way, Meals on Wheels, Habitat for Humanity, and several church choirs and community theaters, and was for 9 years president of the Corvallis United Church of Christ Foundation. Other pastimes included reading, woodworking, racquetball, tennis, golf, and classical music, especially opera. He was preceded in death by his parents and his brother Robert. He is survived by his wife Charlene; his three children: Kim and husband Ken Anderson (Stone Ridge, NY), Kris and wife Dee (Hewitt, NJ), and Jason (San Jose, CA); four grandchildren: Monica, Sara, Heather, and Joshua; and four great-grandchildren: Levi, Isaac, Rose, and Demetria. A public memorial service will not be held, but his family will gather at a later date to celebrate his wonderful life. Lumina Hospice was a great help to Harold and his family in his final days, and memorial contributions in Harold’s name may be made to Lumina.

W. Harold Hunter of Corvallis, Oregon, passed away on January 21, 2020, at the age of 92. His wife Charlene and son Jason were by his side. Harold was known for his compassion, wisdom, and wit. He was born in Maryville, Tennessee, on February... View Obituary & Service Information

The family of W. Harold Hunter created this Life Tributes page to make it easy to share your memories.

W. Harold Hunter of Corvallis, Oregon, passed away on January...