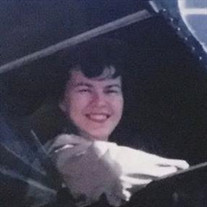 Vivien Carlson Chrostowski came into this world as a true Valentine Girl on Feb. 14, 1926. She left this world to join her family in the Lord's care after struggles with Alzheimer’s in the early morning hours of Saturday, Jan. 9, 2016. She was born in Two Harbors, Minnesota. Her parents, Herman Carlson and Maria Johannson, immigrated to America from Sweden. They were proud of their Swedish Heritage and passed those feelings on to their children. Vivien traveled to Sweden on the ocean liner Gripsholm with her sister, Mayme, and later flew with her husband to connect with various branches of the family. In 1954 she traveled to Juneau, Alaska and found work as a secretary with the U.S. Fish and Wildlife Service. There she met her future husband, Henry, who was with the same agency. They were married in her home town of Two Harbors, Minnesota, in 1957 and returned to Alaska to settle in Anchorage. Summer months were spent at Sand Point in the Shumagin Islands and the winter months in Anchorage. It was a big adventure for her to visit Glaciers Bay and see wildlife across the territory. With the advent of Alaska statehood, Hank was promoted and stationed to Washington, D.C., where they established their home in Fairfax, Virginia. It was there that Vivien and Henry raised their four children, Carol, Andrew, Karen and Steven, with loving care. The family moved to Orem, Utah, in 1970 when Hank was transferred to the U.S. Forest Service, and then again to the Siuslaw National Forest in Corvallis in 1977. Vivien loved her adventures in Alaska and its vastness and beauty. The family spent many summers in their rented cabin fishing, crabbing and boating in the San Juan Islands. She was a devoted mother to her family through the years. She will be sorely missed. She is survived by her husband, Henry; four children, Carol Sabin, Andrew Chrostowski, Karen Smolin and Steven Chrostowski; four grandchildren and one great-grandchild. She was preceded in death by her siblings, Harold, Gladys, Myrtle and Mayme. A visitation will be at noon followed by a service at 1 p.m. Friday, Jan. 15, at McHenry Funeral Home, 206 N.W. Fifth St., Corvallis. Interment will be at Willamette National Cemetery in Portland at a later date. Many thanks to the staff of Stoneybrook Assisted Living and Benton Hospice Service for the care during her final days.

Vivien Carlson Chrostowski came into this world as a true Valentine Girl on Feb. 14, 1926. She left this world to join her family in the Lord's care after struggles with Alzheimer&#8217;s in the early morning hours of Saturday, Jan. 9, 2016. She... View Obituary & Service Information

The family of Vivien Chrostowski created this Life Tributes page to make it easy to share your memories.

Vivien Carlson Chrostowski came into this world as a true Valentine...