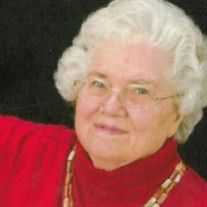 Vivian Lee Kempf went to heaven from the arms of her family, November 22, 2020. Vivian was born on October 15, 1923 in Clayton, Kansas, Vivian was born to Eva and Charles Hagan. Vivian was welcomed by siblings Virginia and Virgil, and was followed by John and Julia (who succeeds her). Vivian dreamed of being a missionary and contacted neighboring farm families to gain college financial credit from their catalog orders to Montgomery Ward. When the family left the ravages of the dust bowl and moved to Oregon, Vivian attended Salem High School and then Oregon College of Education where she began a legacy of children and grandchildren preparing for teaching careers. There she met future husband, Chuck Phelps. After graduation she taught every age and subject as she moved with Chuck while his jobs as school principal changed. Their first child, Cathleen Marie Phelps was born in 1944, followed by James Virgil, Jerry Quentin, and Patricia Ann. Vivian instilled in her sons and daughters the love of learning and the drive to achieve professional goals. After Chuck's death in a logging accident in 1962, Vivian continued to raise the children and teach in Waldport, Oregon. Later, Vivian married John (Bud) Brown and after his death, she continued to manage their farm and teach as a librarian in Salem, Oregon. After retiring, Vivian volunteered to teach in a Hopi mission school in New Mexico returning to her childhood dream of serving as a missionary. Vivian made the most of her retirement, investing in travel and memory making with her sister, children, and grandchildren. She parasailed in Mexico, picked bananas from the tree in Australia, drove a motorhome to Canada, the Grand Canyon, and Yellowstone Park, fished at Diamond Lake and delighted in the birth and growth of each new child, grand, great, and great-great. Wise in her resources, she invested in her church and the future of her family, providing financially for further education for each child. Vivian married Arthur Kempf and continued mission work with him, making improvement to churches around the country until his death from Alzheimer's. Vivian's circle of friends grew throughout her life. Her bright smile and focused attention radiated the knowing you were her favorite. In her last years in memory care, when words didn't come easily, that smile lightened the burden of caregivers and blessed each family member. Please leave condolences for the family at www.mchenryfuneralhome.

Vivian Lee Kempf went to heaven from the arms of her family, November 22, 2020. Vivian was born on October 15, 1923 in Clayton, Kansas, Vivian was born to Eva and Charles Hagan. Vivian was welcomed by siblings Virginia and Virgil, and was followed... View Obituary & Service Information

The family of Vivian Lee Kempf created this Life Tributes page to make it easy to share your memories.

Vivian Lee Kempf went to heaven from the arms of her family,...