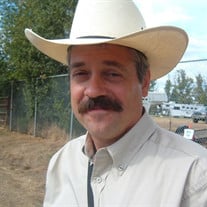 Timothy (Tim) Mark Grant January 17, 1960 – January 28, 2020 Place of birth: Corvallis, Oregon Religious affiliation: Christian Born January 17, 1960 in Corvallis, Oregon, Timothy (Tim) was the youngest of four children born to Winston and Ruth Grant. Tim spent his boyhood years roaming and working on his grandfather’s ranch in Harlan and his father’s homestead in Redmond, Oregon. Although he had a deep unflinching love for his roots in Harlan, he had an adventurer’s heart. His insatiable curiosity about his ancestry took him all over the United States in search of the ancient grave markers of his “pioneer old folks”. He ultimately found that he had blood ties to Daniel Boone and Ulysses S. Grant. He was somewhat of a world traveler also, having visited the African continent, several Central American countries, Scotland, England, Kauai-HI, Alaska, Canada and Jamaica. Tim tried his hand at many things, as long as they kept him outdoors. The song “Don’t Fence Me In” comes to mind. He had a very inquiring mind and always had an idea for a project he wanted to do on the ranch. On December 15, 2004 he met and courted Meritta Maureen Phillips. They were married on September 23, 2006. They had fifteen wonderful years together. They made so many beautiful memories. They crammed a lifetime into those years. Tim had a deep-rooted Christian faith, strong convictions and a big heart that touched all who were fortunate to enter his orbit. He loved fiercely and was always willing to extend the hand of friendship. Tim is survived by his wife, Meritta (Phillips) Grant, his daughter Jessica Grant, his step-son Dustin Hanson, his mother Ruth Davis Grant, (his father Winston Grant preceded him in death), brother Sterling Grant, his sisters Pam Grant and Starla Sheppherd, nieces and nephews, great-nieces and great-nephews, many cousins and a host of other family members and friends. We will grieve his loss tremendously! Visitation and Memorial Service will be held at - Christ Church 15354 Old Hickory Blvd - east of Interstate 65 Nashville, TN 37211 Date - Saturday 2/8/2020 Visitation - 12 noon to 2:30 pm Service - 3:00 pm In lieu of flowers folks may donate in Tim's name to: Our Daily Bread Ministries P. O. Box 2222 Grand Rapids, MI 49501-2222 The service in Oregon will be on Saturday 2/15/2020 at 12 noon at the Eddyville Community Church. Interment will be at the Harlan Cemetery in Harlan, Oregon. The Grant Family wishes to express our sincere Thank You for all the expressions of love through shoulders of support, telephone calls, text messages and cards. We also want to thank those who took the time out of their busy schedules to stop by to bring food or just sit and talk for a while. Mailing address for the Grant family is: 956 Fallview Trail Nashville, TN 37211-6841 1 Corinthians 15:54-55 (NKJV) 54 So when this corruptible has put on incorruption, and this mortal has put on immortality, then shall be brought to pass the saying that is written: “Death is swallowed up in victory.” 55 “O Death, where is your sting? O Hades, where is your victory?”

The family of Timothy Mark Grant created this Life Tributes page to make it easy to share your memories.