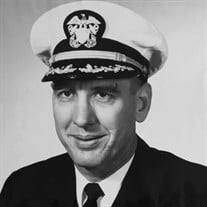 Theodore Robert Kent June 2, 1921 – August 11, 2020 Cdr. Theodore Robert Kent, US Navy, passed away on August 11, 2020 at the age of 99. He truly represented one of the “greatest generation”. Born June 2, 1921 in Lubbock, Texas; he was the oldest of five children. He was preceded in death by siblings Emmy Lou, Ester, and Buzzy; his brother, Ned, lives in Arizona. His father (Robert) died when he was six, and together with his mother Emma Kent (Hesse) and siblings, they moved to Utah and endured the Depression. He joined the Navy in 1939, served thirty years, and achieved the rank of Commander. His significant assignments in the three wars (WW2, Korean, and Vietnam) were many. A few examples were surviving the sinking of two ships back to back early in WW2; the USS Langley and USS Pecos in the Indian Ocean off Java, described in detail in the “Pawns of War” by D.R. Messimer. Later in the war, he served in the European theater. In the Korean War, most notably, he was on a ship that provided support to the Marines at the Battle of Inchon. By the time of the Vietnam War, he was promoted to Commander, where he commanded the USS Gurke from 1963-1965. He completed his Navy career at the Pentagon, and retired in 1969. A quote from his sister-in-law “..the Navy was his life. You know the stories. He was a true hero.” Unfortunately, we don’t know all the stories because, typical of those who served our country, he saw a lot of action and endured hardships, but he wasn’t inclined to brag. Amongst the many medals and honors, he was the recipient of the Bronze Star, Joint Service Commendation and Navy and Marine Commendation medals. Ted did not really retire after his Navy Career; he finished his undergraduate degree and law degrees at Southern Methodist University, Texas. He practiced law first in Texas and then in Newport, Oregon from about 1980 through the 1990’s. Ted had four children: Steven Matthew Kent (1953-1971); Leonora Teresa Kent (1953-) Florence, Oregon; Michael Lawrence Kent (1955-) Corvallis, Oregon; and Marianne Kent-Stoll (1957-) Idyllwild, California; eight grandchildren and two great grandchildren. He had three wives which preceded him in death; Rosemarie (Butsch) (mother of his children), Shirley (Nelson) and Karyl (French). He moved to Corvallis in 2001 to be closer to family. In his later years, he enjoyed family gatherings and any opportunity to take his children out for a meal or listen to his grandson play the piano. He was always up for parties and an Old Fashion, including a pirate party where he attended at the age of ninety-five. His “Ancient Mariner” costume was a big hit! With the current pandemic, a memorial service will be held at a later date in Newport, OR where Ted lived from 1980-2011, and by the sea which he loved. In lieu of flowers, contributions can be made to Karimu International Help Foundation (www.karimufoundation.org) which was founded by Ted’s daughter, Marianne Kent-Stoll, Corvallis Assistance League www.assistanceleague.org/corvallis, or the Democratic Party of Oregon https://dpo.org/donate/ McHenry Funeral Home is handling the arrangements. Please leave your condolence messages for the family below.

The family of Theodore Robert Kent created this Life Tributes page to make it easy to share your memories.