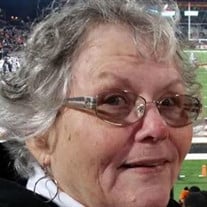 Susan Watt Dunham, who fed the hungry, knitted beautiful things and was a deeply beloved wife, mother and grandmother, passed away on July 17, 2019, following a brief illness. She was 81. Susan was born to Mary and Orville Watt on November 22, 1937, in Upland, California. She attended the University of Oregon before marrying Daniel B. Dunham in 1958. They celebrated their 60th wedding anniversary last year. Susan graduated from the University of Maryland, Baltimore County in 1979 with a B.S. in American Studies. She held HR and administrative positions with the Howard County, Maryland government, an Ohio architectural firm, and most recently Summit/FISERV in Corvallis, from which she retired in 1995. She was for many years a member of First Presbyterian Church of Corvallis, and served a term as a deacon. Susan worked tirelessly to feed the homeless in Corvallis. She was instrumental in securing nonprofit charitable status for Corvallis Stone Soup in 2013, helping form a new Board of Directors and serving as its first chairperson. She continued as a board member until 2017, and led the Thursday food prep team at St. Mary’s School until recently. She cooked her last Stone Soup meal on the Fourth of July. Susan was an expert knitter of innumerable sweaters and projects for her family members and friends, as well as local shelters. A video created for her 75th birthday featured a huge, colorful mountain of the blankets, sweaters and hats she had knitted for loved ones over the years. She was a superb cook and baker, famous for her homemade bread, ice cream cake, enchiladas and Dan’s favorite dinner of chicken and dumplings. Susan and Dan traveled extensively in the United States and Europe. They especially enjoyed riverboat trips in Europe and road trips anywhere there were passable roads in Oregon and across America. She stopped in nearly every yarn store on the Pacific Coast. Susan always saw the best in people, and helped us see the best in each other. In her quiet way, she was fiercely protective and supportive of her family members, friends and her community. She will be profoundly missed. Susan is survived by her husband, Dan; daughters, Jan Dunham (Doug Waugh) of Portland, Oregon and Rebecca Saas (Rick) of Potomac, Maryland, and son David Dunham (Jacque) of Philomath; and grandchildren, Eric, Julia and Bobby Ohman, Kerry, Drew, and Dana Gilbertson, and Katie and Bailey Dunham. Private services have been held. Contributions can be made in Susan’s memory to Stone Soup Corvallis. Susan’s ashes will be distributed at the Oregon Coast, her very favorite place on this good Earth. McHenry Funeral Home is handling arrangements. The family requests that memorial contributions be made to: Stone Soup Corvallis, Inc. P.O. Box 2381 Corvallis OR 97339

Susan Watt Dunham, who fed the hungry, knitted beautiful things and was a deeply beloved wife, mother and grandmother, passed away on July 17, 2019, following a brief illness. She was 81. Susan was born to Mary and Orville Watt on November... View Obituary & Service Information

The family of Susan Dunham created this Life Tributes page to make it easy to share your memories.