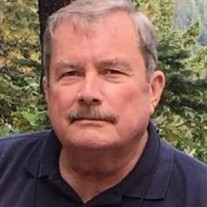 Steve Rudd, 71, of Corvallis, died on Wednesday, August 14, 2019 in Corvallis. Steve was born March 11,1948, in Terre Haute, Indiana, the only child of Patricia Lee (Wampler) and Robert D. Rudd, PhD. After graduating from Corvallis High School in 1966 and OSU in 1970 with the double major in Physical Geography and Geology and a minor in Meteorology and Climate, he accepted a graduate teaching assistantship and the University of Illinois and completed his Masters in 1972. He was the recruited by the Institute of Artic and Alpine Research at the University of Colorado and served as their Research Director for Two NASA-funded research grants involving the first Space Station (Skylab) and ERTS-1, which became the first LANDSAT satellite. In late 1973 he took a break for academics and became a Metro-Denver DUI enforcement officer. In the summer of 1977 he resigned and entered the PhD program at the University of Utah. In 1978, Steve discovered his true passion, The National Park Service. He started at Glacier National Park his favorite moved on to Yellowstone, spent a year at Rocky Mountain and then almost ten years at the South Rim of Grand Canyon. He worked almost exclusively in emergency services for over twenty years, including law enforcement, search and rescue, high angle rescue, firefighting and EMS. In 1981he completed a 1,280 hour paramedic sequence and became one of the parks five paramedic Rangers. In all, he worked in 11NPS areas, spent over ten years as a Chief Ranger and ultimately ended up at Hot Springs National Park as the Division Chief for natural resources and research. Steve retired in April of 2014 and returned to Corvallis where he became an active and well-loved member of the Meadow Park community. Steve is survived by his mother, Patricia Lee Rudd and his wife, Janeen (Bilsland) Rudd, both of Corvallis, his son Lucas James Rudd of Hot Springs, Arkansas, step-daughter Amie (chuck) Winchester of Kansas City, Kansas, Myka Doss of Central Point, Oregon, and Megan Lamb (Jon Kelly) of Bend, Oregon. Honoring his wishes, there will be no funeral. If you wish to remember Steve in some way, contributions may be made to Glacier National Park Conservancy at Glacier.org or mail to Conservancy at P.O. Box 2749, Columbia Falls, Montana 59912. Please leave thoughts and memories for the family at www.mchenryfuneralhome.com.

The family of Steve Rudd created this Life Tributes page to make it easy to share your memories.