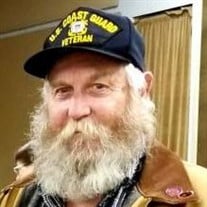 Stephen Frank Fanger Sept. 10, 1949-Feb. 16, 2020 Stephen Frank Fanger was born in Corvallis, Oregon on September 10, 1949 to Franklin Hugh Fanger and Ruth Mintonye Fanger. His mother brought him to the home that he lived in most of his life. He lived 2 years in Myrtle Creek and 14 years in Brookings, Oregon, coming home to Monroe in 1965. He was a Graduate of Monroe Union High School in 1967. He went on to serve in the Coast Guard during the Vietnam era. He spent one year on the Presidential Guard in the Florida Keys, the rest at Grays Harbor Coast Guard Station, Washington. After returning home from the service, he joined his father in the Fanger Construction Company, where he was the heavy equipment driver, building driveways, roads, putting in septic systems, digging foundations for many of the locals. At his father’s retirement he went on to purchase his first 18-wheeler and went on to travel the Western states flat-bedding under the Fanger Enterprises, Inc. He was very proud of his purchase of his brand new Peterbilts. Twenty years of travelling away from home, he returned to the local area driving lowboy for Casey Hull Logging. He spent his last years fabricating, farming, and logging for his daughter and son-in-law at Nusbaum Farms. He also spent 35 years on the Monroe Fire Department, dispatching out of the Alpine Station. He loved going to Fireman Musters with his family. Steve was known for his ‘looooong’ stories, and extended visiting with friends and neighbors. If you were out in your yard, he would stop by and help if you needed it, or just visit. He was usually the first and the last person to come or to leave the Bellfountain Community Church on Sundays. He loved his Man Cave that held his different collections, gun crafting and loading ammo for friends and family were his favorite pass times. Put together a pinochle party, and he was there at a drop of a hat. He met his wife, Janet Marie Rettke, when they were seven and nine years old in Brookings. They were married for 46 years at the time of his passing. They purchased the family farm from his grandmother the year they got married. They had three children, Anna (Daniel) Colvin, Jeffrey (Lis) Fanger, and Amanda (Orin) Nusbaum. They provided him with his eight grandchildren, Jason, Van, Sean, Zachary, Adeline, Natalie, Margaret, and Mallory. He very much enjoyed spending time with them. You could find him at their sports games. You could usually find one of them tagging along with him when he was out and about. He was predeceased by his father and a brother-in-law, Stephen Meyer. His mother at 95 is still living on the farm. Surviving him also are his sisters Christine (Roger) Liles and Kathryn Meyer. A Celebration of his life will be held at the Bellfountain School Gym on March 14, 2020 at 11a.m. Followed by a potluck (another favorite of Steve’s), we invite you to bring your favorite dish to share with community friends. Plans of a drive by of trucks, tractors, and equipment after the memorial are in the works. Call Orin Nusbaum if you’re interested in joining. Staging will be at the Nusbaum farm.

Stephen Frank Fanger Sept. 10, 1949-Feb. 16, 2020 Stephen Frank Fanger was born in Corvallis, Oregon on September 10, 1949 to Franklin Hugh Fanger and Ruth Mintonye Fanger. His mother brought him to the home that he lived in most of his life.... View Obituary & Service Information

The family of Stephen Frank Fanger created this Life Tributes page to make it easy to share your memories.