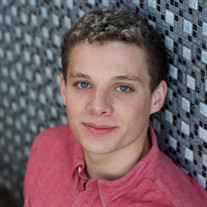 Solomon Gregory Merten, age 19, of Corvallis, Oregon, died unexpectedly in his home on Sunday, October 25th. Solomon “Sol” Merten was born on June 23rd, 2001 in Portland, Oregon. He was a wonderful young man working on developing his passions in life. Sol loved music – especially singing. He wrote many songs that he would play on the guitar and piano, and also reworked popular songs into different tempos for guitar or piano with great results. Solomon sang with the Heart of the Valley Children’s Choir for years. He was interested in the healing and therapeutic power of music. Solomon was one of those kids that was born strong. When Sol was 9, his cub scout leaders reported their shock and surprise on ‘physical fitness day’ when he completed 35 quality push-ups while his peers were struggling with 10. Sol also loved swimming. He could swim in cold, high mountain lakes and rivers long after everyone was cold and wanted out. In one family reunion ‘race across a lake’ at 9,500 ft. elevation, he had crossed the lake and was drying off while the nearest person wasn’t half-way across yet. Solomon swam for the Corvallis Aquatic Team (CAT) for years, and also for Crescent Valley High School, where he was co-captain of the swim team. Sol worked as a lifeguard at Osborne Aquatic Center during high school summers. He also participated in the Mr. & Ms. CV Pageant helping raise funds for Jackson St. Youth Services, Children’s Miracle Network, and the Old Mill Center. Solomon graduated from Corvallis Leadership Commonwealth School in 2019. He attended Willamette University his freshman year, and had recently transferred to Southern Virginia University where he was to begin classes in January 2021. Solomon was passionate about protecting the underrepresented in society. Solomon enjoyed working as support staff for teens at the Trillium Farm Home. Along with music, political science was another major interest. He cared a lot about the direction of our nation, our laws, and our society. He was happy championing the cause of the ‘everyman’ together with original constitutional intent against any politician or political party that was in his line of fire on that particular day. Solomon was a beloved friend. Many have reached out to share what a loving, big-hearted and kind soul he was. He was thoughtful, adventurous, and silly. Solomon was the oldest son of Deon and Eric Merten, of Corvallis. Solomon is survived by his parents; by his two older sisters Alexae and Olivia; by his younger siblings Nicolas, Elizabeth and Isabelle; by his paternal grandparents Greg & Diane Merten; and by one of his maternal grandmothers Patrice Davis. Solomon was preceded in death by his maternal grandfather Michael J. O’Brien, as well as by grandparents Michael and Shari Maksud. Funeral arrangements have been entrusted to McHenry Funeral Home of Corvallis. Funeral services will be held at 11:00am on Wednesday, November 4th at the Church of Jesus Christ of Latter-Day Saints. Due to COVID restrictions, the funeral can be attended virtually through this link: http://mywebcast.churchofjesuschrist.org/corvallisoregonstake Event ID: 85072 (if required.) Solomon’s family would appreciate any memorial donations to be made to an agency that supports young people struggling with mental health issues.

The family of Solomon Gregory Merten created this Life Tributes page to make it easy to share your memories.