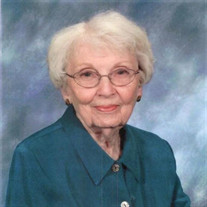 Shirley Mae Parker Pearson, beloved daughter, wife, mother, and grandmother passed peacefully into the loving care of Jesus on March 25, 2020 at Regent Court in Corvallis at the age of 98. Born on June 29, 1921 in North Powder, Oregon, Shirley was a bright and lively child. She was adopted at the age of three by Clara Susannah Parker and Randolph William Parker and was loved and nurtured. She thrived in school and skipped two grades, graduating from North Powder High with older teens. She attended nearby Eastern Oregon College in La Grande for two years and enjoyed college life. She was Princess of Evensong in 1941 and enjoyed music and singing as she trained to be a teacher. She taught elementary school in Pendleton, Oregon, where she continued her voice training for two years. She completed her Bachelor’s in Education from the University of Oregon in 1944 and taught in Santa Clara, California. After World War II, she and Louis William Pearson, also of North Powder, Oregon reconnected with mutual friends in Pasadena, California. They were married in Baker City, Oregon July 31, 1945 and honeymooned in the Philippines, Japan, and Mainland China before Louis was stationed on the island of Guam for a few years. They returned to the United States where they were stationed in Chandler, Arizona. Jimmie Louis and Renée Claire were born there, then they moved to Big Spring, Texas where Randolph William was born. As an adopted child, Shirley was determined to make a stable home for her own children and to let them know they were loved deeply. Shirley and her family lived in Nicaragua for a year, then returned to the States and lived in Columbus, Ohio or on Lockbourne Air Force Base (now Rickenbacker) until Louis’ retirement in 1965. The family returned to Oregon and settled in Corvallis until his death. Shirley resumed her teaching career and pursued her Master’s in Special Education when her children were still students at Corvallis High School. She became a Reading Specialist and worked at Oak Elementary School in Albany until her retirement. Shirley was active in the Episcopal Church of the Good Samaritan and served on the Altar Guild for many years. She was an avid Oregon Duck fan and was excited to attend the 1994 game with Louis to see Kenny Wheaton get ‘The Pick’ to win the game against the Washington Huskies. When she retired from teaching, Shirley and Louis spent time with friends and visiting family members at a small mobile home in Mesa, Arizona or in their condo in Surprise, Arizona where they could escape as rain birds in the winters. Randolph and Renée were frequent visitors and often met Shirley and Louis in Reno to share Thanksgiving with their parents as they were making their annual trek to warmer climes. The family lost Louis to pneumonia in 2003 but Shirley maintained the home they had lived in together until 2016. The thing that made Shirley happier than anything was to be with her family, so in 2005 she took most of the family members on a cruise to Alaska. In the spring of 2016, she moved with her two kitties into Timberhill Place assisted living. Shirley loved small children and would light up if a toddler came into the room. She was generous to local charities and always had an international child to sponsor. She was a warm and happy person with many friends whom she loved to entertain. When she moved to Timberhill Place, she remained gregarious and had a lovely 95th birthday party with friends and family. After a serious fall in August of 2017, she moved to Regent Court where she was loved and cared for by the staff. Shirley’s family wants to thank the staff of Timberhill Place and especially the caregivers of Regent Court who worked tirelessly to ensure Shirley’s health and safety. Shirley is survived by her son Jimmie L. Pearson and his wife Helga, her daughter Renée C. Pearson, her son Randolph W. Pearson, her daughter-in-law Jane Bernstein-Pearson, and her two grandsons, Peter and Matthew W. Pearson. The family will hold a celebration of life at Good Samaritan Church when it is appropriate to safely gather again. McHenry Funeral Home is handling the arrangements. www.mchenryfuneralhome.com

The family of Shirley Mae Pearson created this Life Tributes page to make it easy to share your memories.