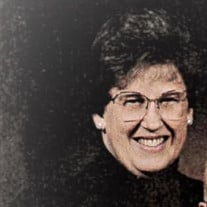 Shirley was born in Charleston, Arkansas, the daughter of Ozro F. Grant and Arta "Ollie" Jameson Grant, the oldest of five girls. They attended the Methodist Church. She spent her early years in Oklahoma, before moving to Tulare, California where her father transferred in the Postal Service in 1945. She soon met her future husband, Tom Baxter in high school. She graduated from Tulare Union High School at the top of her class in 1948. She was a member of the debate team and numerous other activities. She married Tom on October 4, 1948 in Santa Cruz, California. He got a job with Chevron as a vacation relief at gas stations in the area north of the Bay Area. They lived and traveled in a small trailer up HWY 101. After a year they moved to Campbell, California where Tom worked with his father and brother in the house building field. Their daughter, Lois, was born in 1952, in Campbell. After marrying Tom, they attended the Campbell Baptist Church with his family. They left Campbell to strike out on their own, in 1955. They had been to Corvallis to see a friend of Tom’s. They were sold on Corvallis after they had driven down Jefferson St under the beautiful trees near the OSU campus. Their son, John, was born in 1956. Tom worked in the maintenance area at OSU and they lived in a small duplex across from the old Parker Stadium, now Reser Stadium. While still working at OSU he started building single-family homes on the side. With a partner he did real estate development and construction. They developed University Park, which had 222 units and is now Witham Hill Oaks Apartments. Shirley managed the apartments there. Then she attended LBCC, studying bookkeeping and other classes. Then she worked at Copeland Lumberyard in the office. At this point she got her real estate license and sold real estate at Carriage Realty. In a major turn, she and Tom formed their own company, called Tasca, Inc. which stands for Tom And Shirley Company. Tasca built fine single family homes, townhouses, and did major remodeling of homes. This included developing and building Brooktree Townhouses in the Timberhill area. She held a license at Town & Country Realty for a time, selling their townhouses through them. They retired in 1995. Shirley and Tom enjoyed all kinds of travel, including 4 of the Hawaiian Islands. One of the trips to Hawaii was with three generations. Shirley enjoyed doing genealogy with her sister, which took her to the MidWest and eventually to Scotland. She read widely, about a variety of subjects, including the Great Books. She enjoyed learning and attended The Academy of Life Long Learning. Her other interests included gardening, changing her flowerbeds several times, and writing. She was always saying she wanted to write a book about her life. Shirley was a life member of the Rosicrucian Order, AMORC. She enjoyed going to Circle Church of Christ with Lois and John, and going out to eat after church. She was married to Tom for 52 years, who passed away in February 2001. Shirley was preceded in death by her parents and youngest sister Margaret. She is survived by her sisters, Helen in Arizona, Ruth in New Mexico and Laurel in Spokane, Washington, and numerous nieces and nephews. She is also survived by her daughter, Lois Munson and son John Baxter, as well as her grandchildren Monica Grenz and Matthew Munson, and her great grandchildren, Colley, Lily, Jack, Elias, Haileigh, and Jedidiah. There will be a family grave side service. A Celebration of Life Service will be held at a later date, when arrangements can be made. In lieu of flowers, please make donations to Lumina Hospice or Circle Church of Christ. McHenry Funeral Home is handling the final details.

Shirley was born in Charleston, Arkansas, the daughter of Ozro F. Grant and Arta "Ollie" Jameson Grant, the oldest of five girls. They attended the Methodist Church. She spent her early years in Oklahoma, before moving to Tulare, California... View Obituary & Service Information

The family of Shirley June Baxter created this Life Tributes page to make it easy to share your memories.

Shirley was born in Charleston, Arkansas, the daughter of Ozro...