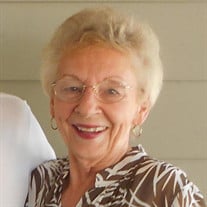 Sharon Elaine (Campbell) Woodall went home to be with the Lord on July 13, 2020 after a 2-year battle with cancer. She was born Feb. 24, 1935 in Salem, Oregon. She was the oldest daughter of Charles and Elaine (Cameron) Campbell. She graduated from Salem High School in June of 1953. On July 12, 1953 she married Bill Woodall in Silverton, Oregon. After their marriage they lived in California, Washington and Munich, Germany while Bill served in the U.S. Army. After the Army they settled in Salem and Sharon was employed at Willamette University as the secretary to the Director of Admissions. In 1957 Bill was transferred to Corvallis and she was then employed at the Oregon Forest Products Research Center until the birth of their oldest daughter Christa in 1958. Another daughter, Lori, was born in 1959 and after that she enjoyed several years of being a stay-at-home mom. In 1961 she returned to work as a secretary at the USDA Soil Conservation Service until 1963. From 1964 until 1980 she worked in Orthopedics as a part-time secretary and then in 1987, she worked part-time for her husband at Allstate Insurance until their retirement in 1992. Sharon greatest gifts were serving and hospitality. She volunteered for the March of Dimes, Campfire Girls, Good Samaritan Hospital Auxiliary, Love INC, Let’s Eat, and Santiam Christian Schools. She served in numerous ways as a member of the Corvallis Evangelical Church, attending since 1967. Her main interests were loving and caring for her family and hosting many special family gatherings at her home. She also felt it a special joy to have been at the births of her four grandchildren as well as being able to care for them, whenever needed, throughout the years. Her church family was an especially important part of her life and she genuinely loved each one of them. She also always loved the wonderful music ministry and participated in choirs in the past. Sharon enjoyed playing the piano, crocheting baby blankets for family, baby showers, and the Santiam Christian School Auction. She also enjoyed attending her grandchildren’s sporting events and numerous other school activities. Another joy was helping to plan and attend her high school class reunions. She never missed one of them and loved her classmates and their long-term relationships. She liked to travel and had wonderful opportunities to travel throughout Germany, Austria, Switzerland, Italy and France while Bill was stationed in Germany. In later years her most memorial trip was to Israel. Other favorite spots were Hawaii and Branson Mo. She is survived by her husband Bill Woodall; Daughter Christa Burrow and grandson Rick Burrow of Corvallis; grandson and wife, Luke and Emily Burrow and great-grandson Ivan Burrow of Sweethome; Daughter Lori Woodall of Philomath; grandson Stephen Webb and great grandchildren Stephen David, Victoria, Robin and Sara Webb of Crawfordsville; Granddaughter and husband Kathy and Chris Kohler and great-grandchildren, Ashley, Kaylie, Erynn and Brayden Kohler of Philomath. She was preceded in death by her parents; sister, Nola Haugen; half-sister, Jean Morrison; and granddaughter, Emily Smith. The family will hold a private graveside service on Friday July 24th at Oak Lawn Cemetery. Sharon requested no flowers, but instead memorial contributions can be made to “The New Hope Fund” of the Corvallis Evangelical Church or to the Santiam Christian Schools “Scholarship Fund”, in Corvallis.

Sharon Elaine (Campbell) Woodall went home to be with the Lord on July 13, 2020 after a 2-year battle with cancer. She was born Feb. 24, 1935 in Salem, Oregon. She was the oldest daughter of Charles and Elaine (Cameron) Campbell. She graduated... View Obituary & Service Information

The family of Sharon E Woodall created this Life Tributes page to make it easy to share your memories.

Sharon Elaine (Campbell) Woodall went home to be with the Lord...