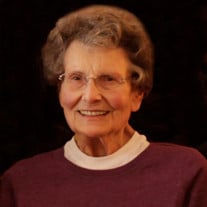 Sara Jane Fisk, 94, of Corvallis, passed away peacefully June 3, 2021. Sara was born in Bakersfield, California, January 24, 1927 to Galen and Floy (Wade) Stahl. She grew up in Bakersfield and graduated from Kern County Union High School in 1944. She went on to earn an Associate in Arts from Bakersfield Junior College and a Bachelor of Arts from College of the Pacific in Stockton, California. While in high school and prior to college, she worked in a book store, a jewelry store, and a dress shop on Hollywood Boulevard while living in Beverly Hills. She also worked as a nurse’s aide, but discovered nursing was not for her and thereafter seriously studied to be pre-med or a medical technologist. Sara did coursework at the College of the Pacific’s Marine Biological Station, and would have pursued a career in marine biology if it had been an option for women at that time. Sara met Leroy Fisk while at College of Pacific and they married September 2, 1951. They lived briefly in San Diego, California, where Sara worked as a medical technologist at San Diego County Hospital. They then moved to Weaverville, California, where she worked at Trinity County Hospital. Her daughter Karen was born in 1953 and they settled in Klamath Falls, Oregon in 1954. In Klamath Falls, Sara worked as a medical technologist at Merle West Medical Center. Her son Kurt was born in 1959. Following Roy’s death in 1982, Sara retired to devote time to Kurt’s special needs and her volunteer work. In 1985, Sara and Kurt moved to Corvallis to be close to Karen and her family. Sara was an active member of the Order of the Eastern Star and the First Congregational United Church of Christ. She also volunteered with Linn Benton Food Share, Meals on Wheels, and Corvallis-Benton County Public Library. Sara enjoyed traveling to explore new places and visit family; some of her most memorable travels were to Europe, Hawaii, and Mexico. She also loved to hike, exploring much of Oregon by foot. Sara backpacked a section of the Pacific Crest Trail from Crater Lake to Lake of the Woods with Roy and friends. Sara’s hobbies included painting, knitting, playing bridge, gardening, attending concerts and plays, listening to classical music, and reading anything she could get her hands on. Sara greatly enjoyed socializing at senior fitness classes, continuing to attend them into her 90’s. She also played a supportive role in her granddaughter’s dance, athletic, and music activities. Sara was preceded in death by her parents, Galen and Floy Stahl, her husband, Roy Fisk, and her brothers, Verlan, Allan, and Lelan Stahl. She is survived by daughter Karen Walker (Alan) and son Kurt Fisk, granddaughters Abbie Kimerling (Tom) and Ashley Walker (Todd Darlington), four great-grandchildren, and many nieces and nephews. A family celebration of life will be held in Klamath Falls later this summer. She will be buried next to her husband at the Eternal Hills Memorial Gardens in Klamath Falls, Oregon. The family appreciates the care and support given by the Corvallis Caring Place, Harmony Senior Living, and Lumina Hospice. Contributions in her memory may be made to ARC of Benton County in care of McHenry Funeral Home. Please leave your thoughts and memories for the family at www.mchenryfuneralhome.com.

The family of Sara Jane Fisk created this Life Tributes page to make it easy to share your memories.