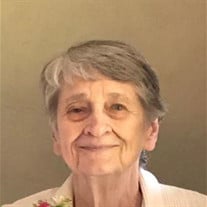 On November 5, 2019 surrounded by loving family, Sandra Cox Lewis succumbed to her battle with cancer and passed peacefully from mortality to immortality into the arms of her beloved Heavenly Father. She was 77 years young. Sandra was born on July 30, 1942, the first of five children to Edwin Charles Cox and Mary LaVerle (Sorenson) Cox of Cedar City, Utah. She was baptized a member of the Church of Jesus Christ of Latter-day Saints on August 6, 1950. While attending Utah State University she met and married the love of her life, Max Calvert Lewis of Dingle, Idaho and they were married in the St. George, Utah Temple on December 29, 1964. Over nearly 55 years of marriage she endeared herself to her husband and her children through countless acts of service, sacrifice and the best homemade chocolate cream pie you can imagine. Sandra was a proud mother and loved her children with all her ability and every ounce of her strength to the very end. She was as loyal a friend as anyone could hope to have but to no one more than her husband. She was blessed with twenty grandchildren and one great grandchild. She was never happier then when her children and grandchildren were gathered together in her presence. Sandra was filled with faith and purpose through her faith in the Lord Jesus Christ and her membership in the Church of Jesus Christ of Latter-day Saints and served in many callings and assignments throughout her life. Sandra followed Max in his various work assignments throughout Utah and Idaho eventually moving to Corvallis, Oregon in August of 1987. Sandra took work at the old Corvallis Henderson Office Supply then with Oregon State University, first in the department of Human Resources and finally as the office manager for the Forestry Department where she later retired. She was a skilled and compassionate employee and always gave everyone the courtesy of being kind no matter the circumstance. Sandra is survived by her husband Max C. Lewis; her three daughters Deann Radke, Tammy Ashdown, and Sherri Lewis; her four sons Charles Calvert Lewis, Jeffrey Max Lewis, Steven Thomas Lewis and Edwin Boyd Lewis; her three siblings; Kathryn Cox Jensen, Barbara Cox Hoag, and Edwin Richard Cox. Sandra is preceded in death by her parents Edwin Charles Cox and Mary LaVerle Sorenson Cox and younger sibling Douglas Charles Cox. God be with you till we meet again! Funeral services will be held on Friday, November 15, 2019 at 11:00 a.m. at The Church of Jesus Christ of Latter-day Saints, 1205 NW Walnut Boulevard, Corvallis, OR 97330. A viewing will be held at 10:00 a.m. at the same location.

On November 5, 2019 surrounded by loving family, Sandra Cox Lewis succumbed to her battle with cancer and passed peacefully from mortality to immortality into the arms of her beloved Heavenly Father. She was 77 years young. Sandra was born... View Obituary & Service Information

The family of Sandra C Lewis created this Life Tributes page to make it easy to share your memories.