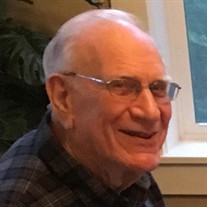 Russell Neal Apt January 17, 1924 - November 26, 2020 Russell Neal Apt, 96, of Corvallis passed away at Stoneybrook Assisted Living in Corvallis on Thanksgiving Day, November 26, 2020. Russell was born in Fresno, California to Harry and Dorothy (Hoffman) Apt and was the youngest of seven children. Russell’s father, Harry, came from a family of builders and Russell would continue in that line of work. Russell’s mother, Dorothy, was valedictorian of her high school senior class, graduated from the University of Nebraska and then worked as a teacher. When Russell was two years old his parents moved the family to Oregon to a home five miles up the south fork of the Alsea river. A wagon road was the only access until they built a dirt road 1.25 miles to their nearest neighbor where they kept their car because the dirt road was impassable during the winter. Trips to and from the outside world required a walk over a mountain trail between the parked car and their home. Russell told stories of riding the uncooperative family horse to a country school two miles from home. During this time, Russell’s dad worked 30 miles away in Corvallis and came home on weekends. This arrangement proved unsustainable, so the family moved to Corvallis in 1935 into a two-story house on 18th street. The move allowed Russell to attend Corvallis High School and graduate with the class of 1941. Over the next several years Russell attended Pacific Union College in Angwin, California, served in the military during WWII, and after the war attended Walla Walla College in College Place, Washington. Russell met Elsie Rivinius in German class while attending Walla Walla College. Friendship turned to love, and they married in College Place on June 8, 1948. They settled in Corvallis where Russell worked with his brother Earl for their dad and were known as Apt Builders. Russell and Elsie welcomed a daughter, Gloria, in 1949 and a son, Bill, in 1951. In 1952, Russell and his brother Earl bought a farm on the Benton-Lincoln county line near Burnt Woods. Bill and Gloria have fond memories watching their dad and uncle milk cows, their mom collecting fresh eggs, a ringer washer on the back porch and the family’s large garden that stretched from the house to the barn. The family moved to Newport in 1955 because Russell was working for Georgia-Pacific in Toledo and the daily commute over highway 20 and milking cows every morning and evening was not a sustainable lifestyle. Russell continued to work for Georgia-Pacific for eight years before returning to building and worked on the construction of the Marine Science Center in Newport. In 1964 he became self-employed when he bought property south of Newport and began building homes. After retirement Elsie and Russell moved to Albany in 1986. For eight years they volunteered with the “Meals on Wheels” program delivering meals. They traveled to Canada, Hawaii, Australia, New Zealand, Fiji, Russia, Washington, D.C., and Europe. They celebrated their 50th wedding anniversary taking a Caribbean cruise with their family. Russell was a member of the Seventh-Day Adventist church his entire life. His faith gave him comfort and a sense of belonging. He was preceded in death by Elsie, his wife of 68 years; parents; brothers Harry Leroy (Bob), George Warren (Binney) who died at age 2, Earl Albert (Bunny), Caroll; and sisters Dorothy Adeline (Dolly), Miriam Pearl (Bug). Survivors include daughter Gloria Rasmussen (Keith) of Corvallis; son William Apt (Grant Molsberry) of Portland; granddaughters Kamila Hanson (Ryan) of Long Beach, WA. and Rochelle Rasmussen of Louisville, KY; great-granddaughter Kylah Peterson; and many nieces and nephews. Russell’s final resting place is with his wife at Willamette National Cemetery in Portland. Memorial contributions can be made to Samaritan Evergreen hospice.

The family of Russell Neal Apt created this Life Tributes page to make it easy to share your memories.