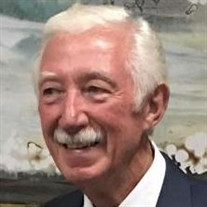 Rodney (Rod) Vernon Holland, 72, a longtime Corvallis resident and beloved area Chiropractor, passed away Tuesday, March 23, 2020 following a brief illness. Dr. Holland was born in Sweet Home, Oregon to parents Noble and Inez Holland on May 16, 1947, but spent his early childhood in Poplar Bluff, Missouri. In 1952, the family moved back to the Willamette Valley where Rod attended Albany public schools and graduated from Albany High School. Holland later obtained a BS from Harding University in Searcy, Arkansas, a DC from Western States Chiropractic College, a CCSP from Los Angeles College of Chiropractic, and an MBE from the Academy of Bio-Energetics. He also served his country in the United States Air Force as a pilot and, later, in the Oregon Air National Guard. Dr. Holland established his Corvallis chiropractic office in 1979 and practiced there until January 2020. In recent years, he authored a book focused on the efficacy of natural medicine. Holland was a cherished member of the Circle Church of Christ in Corvallis where he served for 26 years as an elder, teacher and worship leader. He was also known for his love of singing, playing guitar, and photography. He is survived by his wife of 52 years, Linda Loretha Brown Holland of Corvallis, his brother Van (Pat) Holland of Poplar Bluff, Missouri, his daughter Karie Slater of Corvallis, sons Jason (Ashley) Holland of Thompson Station, Tennessee and Travis (Anita) Holland of Spring Hill, Tennessee, and grandchildren Michael, Matthew, Hunter, Raegan, Callen, Lexi and Drew. A memorial service will be announced in the near future. Memorial contributions may be made to the University Christian Center, c/o Circle Church of Christ, 2020 Northwest Circle Blvd., Corvallis, Oregon 97330.

The family of Rodney Vernon Holland created this Life Tributes page to make it easy to share your memories.