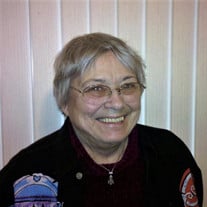 Roberta Vale Bier was third-generation Oregonian. She was born in Corvallis on February 19, 1930, to Thomas Avery and Adah Ketcham Vale. She lived in Corvallis most of her life, graduating from Corvallis High School in 1948. Roberta married Charles William Crocker in 1947. They lived at the Alsea Fish Hatchery until Charles was recalled into the Air Force for the Korean War. One month after he was sent overseas, he became missing in action. Four years later he was declared killed in action in 1954. They had one daughter, Terry Lee Crocker, who was born after he was declared missing in action. After Charles died, Roberta lived with her mother and worked at the telephone office in Albany. In 1955, she met and married Alvin LeRoy Ebert and became stepmother to Linda, Ronald and Wade Ebert. Alvin and Roberta had two more girls, JoAnna and Nancy. From 1960 to 1965, Roberta worked for PayLess Drugs part time. After her husband had a heart attack, she realized that she needed more education in order to support the family. At the age of 39, she started college LBCC. She received her bachelor’s and master’s degrees from Oregon State University by 1975. Shortly after graduation she went to work for Corvallis Parks and Recreation as the first full time senior center director in 1975. She was married to Alvin until he passed away in 1986. While working at the senior center, Roberta met and married Linwood Bier in 1987. She retired early so they could enjoy retirement and travel. Family and friends were most important in their lives. She was married to Linwood until he passed away in 2002. Roberta believed in volunteering her time. She served on the Salvation Army board, and the United Way. At church, she was both a deacon and an elder at the Calvin Presbyterian Church. She also served on the Retired Senior Volunteer Board and on the Corvallis Library Foundation Board. She enjoyed making quilts for homeless kids across the state as well. She loved the study of genealogy and was known as the family historian. Roberta is survived by two of her three children and their spouses, Terry and John Eaton of Vancouver, Washington, JoAnna Ebert and Chapman Stout of San Antonio, Texas and Nancy’s husband, Ronald Davis of Keizer, Oregon. Also surviving her are 19 grandchildren; 28 great-grandchildren; and 15 great-great-grandchildren; Wade’s wife, Mickey Ebert, Betty’s husband Mike Arnold, and stepchildren, James and Janet Bier, Ruth and Phil Dorr; and Linda Goulart and partner Bill. Preceding her in death was her daughter, Nancy Davis; stepsons, Ronald Ebert and Wade Ebert; stepdaughters, Linda Ebert, and Betty Arnold, and grandchildren Chris Ebert and Ruth Ebert. Memorials donations can be made to Corvallis Library Foundation, Public Broadcasting or nonprofit agency of your choice. A memorial service to be held at 2 p.m. on Saturday, Nov. 24, at McHenry. Reception to follow. A burial service will be held at noon on Monday, November 26, at Willamette National Cemetery in Portland.

Roberta Vale Bier was third-generation Oregonian. She was born in Corvallis on February 19, 1930, to Thomas Avery and Adah Ketcham Vale. She lived in Corvallis most of her life, graduating from Corvallis High School in 1948. Roberta married... View Obituary & Service Information

The family of Roberta Bier created this Life Tributes page to make it easy to share your memories.

Roberta Vale Bier was third-generation Oregonian. She was born...