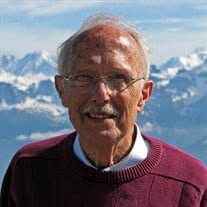 Robert S Yeats (Bob) age 90 died December 5, 2021 after battling Alzheimers. He was born in Miami, Florida on March 30, 1931 to Robert S. Yeats and former Carolyn Elizabeth Rountree. In 1943 the family moved to Gainesville where Bob finished high school in 1948 and graduated from the University of Florida in 1952 with BA in geology. He was a member of the Pi Kappa Phi fraternity. He played classical piano, clarinet in the University of Florida band, and saxophone in a mambo jazz band. In December 1952, he married Lillian Eugenia (Jean) Bowie, and was commissioned second Lieutenant in the Army, spending his military service at Fort Eustis, Virginia, where he taught map reading and military intelligence. He earned his PhD in Geology at the University of Washington, where he indulged his love of mountain climbing through a mapping thesis in the North Cascades. In 1958 he joined Shell Oil Company as an exploration geologist in the Los Angeles area. In 1967 he made the jump to the academic world, becoming a geology professor at Ohio University and launching research projects in southern California. His interest in earthquake geology was sparked by an earthquake in 1972 on a fault he had mapped in an oil field. In 1977, he returned to his beloved Western US as the chair of the Department of Geology at Oregon State University. His international reach extended as chair of an international group studying active faults worldwide, first with UNESCO and later with the International Lithosphere Project. Bob supervised 53 MS and PhD students during his academic career. After retirement, Bob served as Senior Consultant for Earth Consultants International. Bob was a founder of plate tectonics-driven earthquake geology research, and a leading expert on earthquake risk in southern California, Cascadia, the Himalaya, Japan, and New Zealand. His textbook "The Geology of Earthquakes" is considered the definitive text in the field. He followed it up with "Active Faults of the World,” written in retirement. Over his 60-year career he authored hundreds of technical papers with students and fellow collaborators. Bob was perhaps most impactful as a champion of outreach, writing "survivor" books for the public and policy makers to help them understand the risk and take practical steps to prepare their communities. These include "Living with Earthquakes in the Pacific NW", "Living with Earthquakes in California" and most recently "Earthquake Time Bombs." His nickname was “Dr. Doom,” and his legacy will be lives saved through awareness. Bob was well known and respected in the geological science community. He was a Geological Society of America Fellow and received the prestigious Halbouty Award from the American Association of Petroleum Geologists. In 2006, the Department of Geosciences at Oregon State University established the R.S. Yeats Professorship in Earthquake and Active Tectonics. In 1991, Jean, his wife of 38 years, died of breast cancer. He met Angela Hayes in 1991, and they were married in 1993. During these golden years they lived in Paris, New Zealand, and traveled the world. They loved to hike, ride their bikes, spend time at the beach and especially loved time with their family enjoying their many grandchildren. Bob is survived by wife Angela Yeats, children and spouses: Bob and Gail Yeats, Ken and Carolyn Yeats, Dave and Meghan Yeats. Stephen Yeats, Sally and Chris Hale, stepchildren and spouses: Mark and Mary Hayes, Joanne and Johnny Smith, John and Kathleen Hayes, Katy Hayes, Robert and Missy Hayes, sister Margaret Rice and twenty-two grandchildren and seven great grandchildren. He is preceded in death by his parents and sister Carolyn Kuban. A Celebration of Life will be held at 10:30 at First United Methodist Church, Corvallis, on January 8th, 2022. Memorials may be given to the Geology Field Camp Program Fund through the Oregon State University Foundation, or the General Fund of the First United Methodist Church, Corvallis. The family of Bob Yeats wishes to extend our sincere thanks to Dr. Shawn Foley and the staff of Philomath Family medicine, Caregiver Tabitha Pope of New Horizons, Willamette Springs Memory Care and Serenity Hospice. McHenry Funeral Home is handling arrangements.

The family of Robert Sheppard Yeats created this Life Tributes page to make it easy to share your memories.