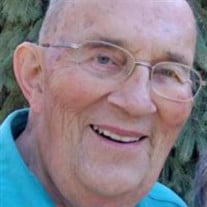 Robert (Bob) Davis Talbott was born on the family farm in Gorin, Missouri on August 25, 1931 to John Hardy Talbott and Thelma Evelyn Talbott (nee Davis). He attended a one-room school in Gorin through 3rd grade when the family had to sell the farm. They loaded all their belongings in the family car and drove West to Raymond, WA. He completed Elementary School in Raymond where he had the run of the town on his bike with his dog Dugan. The family later moved to Garibaldi, Oregon where Bob attended Garibaldi High School. He helped his dad build the family home there and made lifelong friends. He was one of the tallest kids in school, quite popular, and played every sport. When he asked the Coach if he could play basketball he was told he would have to play baseball and football also. He graduated in 1949 in a class of 12 students and went to Oregon State College in Corvallis. He joined the Navy in 1951 and obtained the rank of Petty Officer 3rd Class. His Navy time was spent in Kodiak, AK working at the airfield where he trained pilots in wilderness survival. He relocated to Whidbey Island, WA and became the Navy trainer in the PNW for nuclear warhead and radiation detection and protection. His years in the Navy were some of his most memorable and formative. Following his Navy discharge, he attended Humboldt State University, in Arcata, CA where he earned the first Master's of Psychology degree offered there and married Shirley Hedges. They had two daughters, Sherrie and Debbie, and the family enjoyed camping, boating, swimming and water skiing. Bob loved sharing his memories of these good times. He started his career at Clark Community College (CCC) in Vancouver, WA where he was a college counselor. He became the Director of Counseling at CCC and in 1968, was asked to be the Director of Counseling for the newly-formed Linn-Benton Community College (LBCC) in Albany, OR. His career at LBCC spanned 30 years. He was instrumental in the creation of a Women's Center in the mid 70's, and managed many programs and departments focused on students and developmental education. At the time of his retirement, he was serving as the Associate Dean of Students. In 1982, Bob married Judy Keith (nee Amsberry) and adopted her two daughters, Alicia and Stephanie. The family continued to camp and take road trips together during summer vacations. Bob loved hunting and fishing throughout his life and some of his favorite times were with his buddies around a campfire. He also had a passion for travel and after his retirement, he and Judy traveled extensively throughout the US. Grandchildren came, and Bob was over-the-moon in love with them and was their beloved Pop-Pop. Many students and staff at LBCC have ‘Bob stories’ about how he helped them in their careers and lives through his compassionate wisdom and kindness. His family will always remember him for his humor, open-heartedness, deep love, and rock-solid presence in their lives. On May 18, 2020, Bob died of natural causes at home surrounded by his family. He is survived by his wife, Judy; his four daughters- Sherrie (Mike) Porter, Debbie Talbott, Alicia (Gary) Castleman, Stephanie (Blake Loney) Talbott; granddaughters Carson Fulford and Aspen Self; his sister Judy (Alan) Perkins; and many cousins, nieces and nephews. The family would like to thank Providence Benedictine Home Health and Lumina Hospice for their care and compassion. McHenry Funeral Home is handling arrangements. A private graveside service will be held, followed by a Celebration of Life open to all friends and family once we are free to celebrate again. In lieu of flowers please consider a donation to The LBCC Foundation Founder's Scholarship, see https://linnbenton.edu

Robert (Bob) Davis Talbott was born on the family farm in Gorin, Missouri on August 25, 1931 to John Hardy Talbott and Thelma Evelyn Talbott (nee Davis). He attended a one-room school in Gorin through 3rd grade when the family had to sell... View Obituary & Service Information

The family of Robert Davis Talbott created this Life Tributes page to make it easy to share your memories.

Robert (Bob) Davis Talbott was born on the family farm in Gorin,...