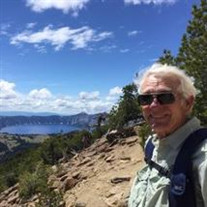 Dr. Robert (Bob) E. Steele Jr., passed peacefully at his son Tom’s family home April 19, 2020 after a lengthy and brave battle with pancreatic cancer. He was born January 8, 1937 in Kansas City, Missouri. Robert grew up in Nevada, Missouri where he graduated valedictorian from Nevada high school in 1955. He enjoyed managing his own dance band for four years while in high school. He matriculated to the University of Missouri where he was a proud member of Beta Theta Pi and graduated valedictorian in 1959 with a degree in chemistry and served as president of 14 organizations. In 1963, Robert graduated cum laude from Harvard Medical School. He next completed a Harvard internship where his research done during this time later received a national award for best basic research of the year. Following his internship he married Emily Stephens where their adventure began while he served two years in the Navy in Taiwan and Vietnam. He completed an orthopedic residency in 1971 in which he served as Chief Resident at Massachusetts General Hospital. The family, which now included three children moved to Corvallis, Oregon in May of 1971 where he joined the staff of Good Samaritan Hospital until retirement in 2006. Dr. Steele founded the joint replacement institute where he performed the second total hip replacement in the state of Oregon and the first total knee replacement. He served on many committees including the board of directors, the long range planning committee, and served as medical staff president. Bob, as he was almost exclusively known in the Corvallis community had many fond associations over the nearly 50 years in which he resided. Bob enjoyed being a founding member of the Corvallis Episcopal churches men's breakfast group, of playing clarinet in the Corvallis Community Band’s summer concerts for 35 years, and as loyal member of the Tuesday night Squirrel’s group and the Thursday beanery bunch where he was very proud to have attended all 20 of the annual bicycle and ski trips. Bob was an environmentalist who loved bicycling, skiing, and white water rafting. Bob was an avid cyclist who rode to and from the Hospital rain or shine for 35 years but for the infrequent Corvallis snow days. He was a very devoted and loving father who made family dinner a ritual. He always rode his bike home in time for dinner only to return to the hospital to do his rounds and to attend to his many responsibilities after the family meal. During his nearly 56 year marriage his greatest passion was the advocacy of, the devotion to, and the support of Emily’s art career and that of the Corvallis Arts Center. He is survived by his son Ed, his daughter-in-law Amy; his son Tom, his daughter-in-law Kelli; his daughter Linda, his son-in-law Christian; his grandchildren: John, Grace, Savannah, Brian, Henry, Jayden, Christian, Lily, Colton, and Logan; and many loving extended family and friends. Due to the current isolation requirements a funeral service will be held at the Church of The Good Samaritan on a future date yet to be determined. In lieu of flowers, donations may be made to the Arts Center Foundation Steele Family Fund at 700 SW Madison, Corvallis, OR 97330. McHenry Funeral Home assisted with arrangements.

The family of Dr. Robert (Bob) E. Steele Jr. created this Life Tributes page to make it easy to share your memories.