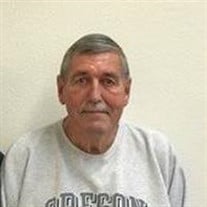 Robert Lee Spinney (known to friends as just “Spinney”), 72, passed away on April 18, 2019 from complications of Parkinson's disease in Albany. Bob was born on January 10, 1947, in Portsmouth, New Hampshire and it was a stormy day, which likely meant snow and wind, knowing New Hampshire and Maine weather. His parents, Charles and Lillian Spinney, were sure he was a “mistake” until his mom was several months along. In his early years in Maine, he was known as “Bootsie” because he was given a pair of cowboy boots and didn't want to take them off and usually slept in them too. One of his favorite memories of this dad was the time when Bob was using a pea-shooter to shoot at passing cars on the street in front of their house and his dad let him have it. Bob's mom was the usual disciplinarian in the family but that time he got to see his dad’s bad side! Bob graduated from Robert W. Traip Academy in Kittery Point, Maine in 1966 and New Hampshire Vocational Institute in 1968. He then attended Oregon Institute of Technology from 1968-70, graduating with a bachelor's degree in automotive technology. Bob met his future wife, Carol, in 1969 when she was a freshman at OIT. Bob and Carol went on a double date to Crater Lake during the first month of the term and it was love at first sight. They married on July 19, 1970 in Klamath Falls and then took a two-week honeymoon, driving and sightseeing across the U.S. to a job waiting for Bob in Maine. He taught industrial arts at Mattanawcook Academy in Lincoln, Maine for one year during which time both he and Carol decided Lincoln was way too cold for them! After several weeks of 22 below zero weather, they returned to Oregon where they settled in Corvallis so Bob could attend Oregon State University to get certified as a teacher in Oregon. Bob took a summer job at OSU in Crop Science and enjoyed the work so much, it became full time and he suspended his plans of going back to school. While at OSU he spent time in seed certification, working with Don Brewer and Oscar Gutbrod, and also in weed control, working with Arnold Appleby, Bill Brewster, and Larry Burrill in evaluating an enormous amount of field research. Arnold said that Bob always brought to the project a feeling of spirit and good humor. Bob helped supervise graduate students and taught them how to lay out field trials and developed lasting friendships through their work. Arnold’s project was considered one of best in the nation so Bob worked with students who are now influential people in agriculture around the world. Bob participated in professional agricultural societies, held several professional licenses, and was co-author on numerous publications while at OSU. While working at OSU, Bob also spent time at Hyslop Farm, working with Gerry DeKam and Jim Fell doing research plots and putting out field trials. After Oregon State University, Bob worked for several private chemical companies over the years, teaching how certain herbicides were to be used in agricultural fields. He capped his career by working for 27 years for Western Farm Service (Crop Production Services/Nutrien), starting in 1989 and retiring in 2016. At Western Farm Service/Crop Production Services, Bob was the top salesperson from 1993-2004. If anyone had a question about how to use a product or what was going on with their crop, Bob knew who to call to get the answer and he learned as he went, becoming a huge resource of information on agricultural products. Bob received the 1997 Crop Advisor Stewardship Award from the Far West Fertilizer and Agrichemical Association and was honored for 20 years of service to Crop Production Services in a commitment to excellence in sales and customer service. He was again honored in1999 by the Ag Consultant Magazine, being one of the inductees into the 17th Annual Crop Professionals Hall of Fame. More recently, in 2018 he was recognized with the Outstanding Service to Agriculture Award by the Oregon Women for Agriculture. Bob is well known in agriculture all over the Willamette Valley with farmers, staff at Oregon State, and extension agents. Bob not only excelled at his work life, but he was also such a likeable person to those who knew him. He’s been described as one of a kind, there won’t be another like him, he expects a lot from those he works with but gives more, he wears his heart on his sleeve, he’s a part of the family, and people have been naturally drawn to him and very much care about him immediately. He was well-known to many and those who met him never forgot him. He was modest through all this, and being the perfectionist he was, he was never satisfied and wanted to achieve more. Bob and Carol were married 48 years and traveled extensively, having taken six cruises and also toured several European countries and vacationed at various locations in the U.S. Bob was an avid gardener as evidenced by his perfect lawn and numerous rock walled flower beds. His yard at the house in Corvallis could have been in Better Homes and Gardens magazine! He also enjoyed rebuilding numerous classic cars, each one grander than the one before, and enjoyed drag-racing his red 1967 Plymouth in Woodburn. A celebration of Bob’s life is set for 2 p.m. on Saturday, May 4, 2019 at Fairview Mennonite Church, 35100 Goltra Road, Albany. In lieu of flowers, please send any contributions to the Oregon Women for Agriculture, Crop Identification Sign Program and/or Linn-Benton Women for Agriculture Scholarship Account. The address for either one is: 30 NW Hickory Street, Suite 120, PBM 50, Albany, OR 97321. Bob was larger than life and he will be forever missed by his wife, many friends, co-workers, and family. May he rest in peace.

The family of Robert Lee Spinney created this Life Tributes page to make it easy to share your memories.