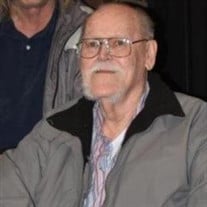 TSgt Robert Dean Snyder, U.S. Air Force Ret. passed into eternity at the Oregon Veterans Home in Lebanon on 3/19/2020. He was born in Ault (CO) to Robert Elmer & Hazel Tot (Baldwin) Snyder. His family moved to Corvallis (OR) when he was a child. Robert married Joyceline “Joyce” Janiece Wilson on 6/10/1952. Their daughter Nancy Janiece (Perin) was born in 1953 in Fairbanks (AK) followed by their son, Robert “Rob” Curtis Snyder in 1955 in Sacramento (CA). Robert spent 20 years in the U.S. Air Force during both the Korean and Viet Nam Wars stationed around the world, including Alaska, California, Washington, Germany, New Mexico, Camp Adair (OR), Turkey, and Mt. Hebo (OR). After retirement, he went to work as a millwright at Evans Products in Corvallis until he once again retired. Robert and Joyce moved to Philomath (OR) in 1997. Robert was a life member of the NRA, Oregon Hunters Association and the VFW. He was a long time member of Albany Eagles, Lebanon American Legion, Corvallis Moose Lodge and Lebanon Elks Lodge. Even into death, he was surrounded by his loving family. He is preceded in death by his parents and his brother MSgt Junior “Jay” Dale Snyder, U.S. Air Force Ret. Robert is survived by his wife Joyce, daughter Nancy and son-in-law David William Perin, son Rob and daughter-in-law Anjanette Snyder, grandchildren Richard August Godden, Michelle Janiece (Godden) Perin-Callahan, David Eugene Perin, Awbrey Lynne Perin and Alexandra “Alex” Marie Snyder and great-grandchildren Marc Cody Howard, Dean Robert Howard (his namesake) and Caitlynn Rose Godden, as well as several nieces and nephews. Robert was a humble, honest, hard working man who loved his family, his basset hounds and his horses. A consummate jokester and storyteller, he drew faces on his grandchildren’s toes in their sleep and convinced his great-grandson’s of the existence of toe fish who would nibble them off if dipped in the river. He had a hearty laugh and enjoyed going dancing with his wife and having coffee with his friends. He leaves behind a legacy of strength, laughter and love. There is not a service planned at this time. In lieu of flowers, please make a donation to the VFW in Robert’s name.

TSgt Robert Dean Snyder, U.S. Air Force Ret. passed into eternity at the Oregon Veterans Home in Lebanon on 3/19/2020. He was born in Ault (CO) to Robert Elmer & Hazel Tot (Baldwin) Snyder. His family moved to Corvallis (OR) when he was a child.... View Obituary & Service Information

The family of Robert Dean Snyder created this Life Tributes page to make it easy to share your memories.