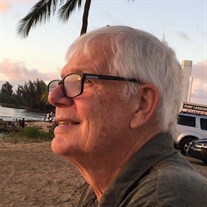 Robert Joseph Salter of Corvallis, died peacefully in his sleep, at home on January 26, 2020. He was born on April 10, 1947 in Staten Island, NY to Robert H. and Alice T. Buon Salter. Attending New York Schools, he graduated from Curtis High in 1964 and Richmond College in 1968. He then became a New York City Fireman in the busy Hell’s Kitchen area. He learned to cook in the firehouse, and later entertained many a dinner guest with his fireman tales. Bob was an entrepreneur and started quite a few businesses over the years. He married Jane E. Gibson, his beloved wife, in 1977. Together they raised four daughters. His family was one of his greatest treasures. Bob was a devout Catholic and his faith was a key part of his personality. He was preceded in death by his parents, Bob and Alice, a niece Heather Gibson, and a nephew, David Schiller. Survivors include his wife Jane, and their four daughters and spouses; Sara Moot (Pete Aiken), Claire Matta (Jason), Anna Salter, Catherine Guiremand (Erik). He is also survived by his sister, Pat Connors and her husband John. He was a proud Papa to Daniel, Jake, Lucy, Felicity (Tess), Maria, and Patrick, his grandchildren. In lieu of flowers donations may be made in Bob’s memory to Options Pregnancy Resource Center, https://www.optionsprc.org/ or the St. John Society at St. Mary, Corvallis. http://www.stmarycorvallis.org/ There will be calling hours for friends to greet the family from 5:00 to 7:00 pm on Thursday, January 30, 2020 at McHenry Funeral Home, Corvallis. The family hopes Corvallis friends will come by to see them and say goodbye to Bob. A funeral service will be held at 11:00 am on Friday, January 31, 2020 at the Nativity of the Mother of God Ukrainian Catholic Church, 704 Aspen Street, Springfield, Oregon. http://www.nativityukr.org/ All are welcome and there will be a lunch following the service. Private interment will follow for the family. You may leave thoughts and memories for the family at https://www.mchenryfuneralhome.com/obituaries/Robert-Salter-3/#!/TributeWall

The family of Robert Joseph Salter created this Life Tributes page to make it easy to share your memories.

Robert Joseph Salter of Corvallis, died peacefully in his sleep,...