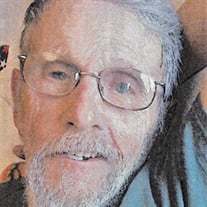 Robert D. Quayle, 80, of Corvallis, Oregon passed away on Saturday, August 7, 2021 at the Oregon Veteran's Home in Lebanon, Oregon. Robert Quayle died Saturday, August 7, 2021 at Lebanon Oregon Veteran’s Home. He was born, November 14, 1940 to Delbert Quayle and Blanche Worsheck Quayle in Alameda, California. Bob had a big brother, Allison, that died at age three. Bob married young and enjoyed his three children: Kelly, Kristie, and Robbie. He later divorced. Bob was proud of his military service and had three tours of duty. He began log-haul trucking after he was honorably discharged. In 1984, along came Dixie and they married on his birthday in 1985. His family increased with three more children: Don, David, and Diane. Bob continued driving and after some time, convinced Dixie that it was their calling. Bob was a jack of all trades around the house. He loved working with carpentry, countless hours of mechanic work on kids’ cars, as well as refurbishing homes. When it came time to relax, he was with Dixie and his dogs. Bob will be missed by family, friends, and his loved ones included.

The family of Robert Dwight Quayle created this Life Tributes page to make it easy to share your memories.

Robert D. Quayle, 80, of Corvallis, Oregon passed away on Saturday,...