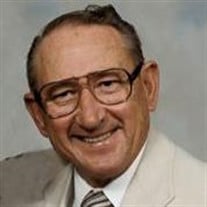 Robert (Bob) died April 24, 2019 at the age of 92. His distinctive personality and quick sense of humor will be remembered by many. Bob was born November 29, 1926 to Lawrence and Lillian Higinbotham in Port Angeles, Washington. He grew up in Pysht, Washington, a small logging community. There, he learned to love fishing, hunting and crabbing. When he was 14 years old, he caught a 63 pound Chinook salmon, a local news story. During World War II, he attended Clallam Bay High School and excelled at basketball. He often had to jog 13 miles home from practice due to wartime coastal blackouts. His graduation was on D-Day, June 6, 1944. Bob spent one year at the University of Washington which established him as a Husky fan. In his early work life, he was a logger for six years around Oregon and Washington. From 1950-1952, he served in the US Army and was a veteran of the Korean War. Following Korea, he graduated from DeVry Technical Institute in Chicago, studying electronics, leading to his employment at Boeing as a radar technician for eight years. On May 17, 1958, he married Barbara Jean Harman at the St. Andrews Episcopal Church in Port Angeles. The couple lived in Kirkland, Washington with their two boys, Larry and Alan before moving to Corvallis where their daughter Jeanie was born. Bob was employed by the US Postal Service for 23 years until his retirement in 1989. Bob’s interests included family fishing, gardening, crabbing, viewing all sports, country music and creatively planning vacations around the Northwest. He was preceded in death by his parents; and his loving wife, Barbara in 2015 after 58 years of marriage. He is survived by children, Larry, Alan and Jeanie Higinbotham; and grandchildren Eric, Katie and Sienna Higinbotham. Donations may be made in memory of Robert to the Leukemia/Lymphoma Society or Operation Homefront.

Robert (Bob) died April 24, 2019 at the age of 92. His distinctive personality and quick sense of humor will be remembered by many. Bob was born November 29, 1926 to Lawrence and Lillian Higinbotham in Port Angeles, Washington. He grew up in... View Obituary & Service Information

The family of Robert James Higinbotham created this Life Tributes page to make it easy to share your memories.