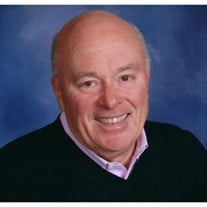 Robert (Bob) Flint, 78, died March 30, 2020 at Willamette Springs Memory Care, in Corvallis, Oregon. He was the widower of Helen Flint, the love of his life and best friend. Bob met Helen when he was stationed in the Army at Fort Belvoir, VA, where he taught mechanical engineering. A year later they were married on April 16, 1966 and started their family in Detroit, MI. They enjoyed long walks hand-in-hand exploring either their own neighborhood or the city they traveled to. Bob lost Helen to ovarian cancer in 2009. Bob received a bachelor's degree from Northern Michigan University, Marquette, and a master’s degree from Eastern Michigan University, Ypsilanti. Both degrees were in mechanical engineering. Bob was a career engineer with both Ford Motor Company (1963 - 1974) and Hewlett Packard (1974 - 1999). At Ford, he was on the design team for the rear end of the ‘72 Gran Torino. At HP, he was hired on to design the first ever automated production line, which was built for the calculator division located in Corvallis, OR. He retired from HP Corvallis in 1999. After a brief stint to the east coast, he and Helen tried once again, in 1980, to settle down in Oregon. This was with good intent, until 1984 when Bob, with Helen’s support, thrusted their family into the expat world of the Orient. Bob accepted the position of the manufacturing manager for HP-Asia headquartered in Seoul, South Korea which the Flint family called home from 1984 - 1988. When the family traveled, Bob insisted they only pack carry-on luggage so they could sprint to their connecting flight in Hong Kong in the ‘80’s or grab his favorite shrimp cocktail at Chicago O’Hare airport in the ‘90’s. He always prepared for the worst and celebrated the best. Bob was raised off of 10 Mile road in Detroit, Michigan. His father owned his own gas station, called Flint's Service and Muffler Station, with a prime location across the street from the Chrysler plant. His father taught him how to turn a wrench which he passed down to his son Adam when they restored a Triumph TR3A together when Adam was in high school. In his retirement years, he played golf and poker with the boys and looked forward to his daily coffee with his friends and at the end of the day, enjoyed a scotch on the rocks as the sunset. In his final years, he traveled the oceans with his daughter, Jenifer, where he went to places he had only read about, like the Panama Canal. His friends called him a fine man, his kids called him their compass and his grandchildren just called him papa. Surviving are daughter, Jenifer and her husband Greg Curtis and son, Adam and his wife Stacey and four grandchildren: Mason and Noah Curtis and Bailey and Addison Flint;a sister, Carolyn and her husband Bob Nechal; and a sister-in-law, Mary Clare Gosse. He was preceded in death by his wife Helen and a brother Ed, a Jesuit priest. Committal of ashes will be at St. Mary's Catholic Church Cemetery in Corvallis, OR. Please leave messages of condolence here on the website.

Robert (Bob) Flint, 78, died March 30, 2020 at Willamette Springs Memory Care, in Corvallis, Oregon. He was the widower of Helen Flint, the love of his life and best friend. Bob met Helen when he was stationed in the Army at Fort Belvoir,... View Obituary & Service Information

The family of Robert Albert Flint created this Life Tributes page to make it easy to share your memories.