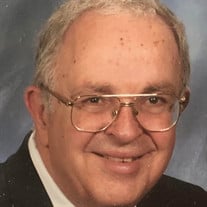 Robert Bruce “Bob” Bernhard January 2, 1941-March 11, 2021 Bob Bernhard, 80, of Corvallis, OR, passed away on Thursday, March 11, 2021. Bob was born on January 2, 1941 to Harold and Clara Bernhard in Yonkers, NY. He developed a love for hiking and the outdoors during his summers in high school as a camp counselor for Camp Tohkomeupog in the White Mountains of New Hampshire. He earned a BS in hotel administration from Cornell University in Ithaca, NY, where he was a member of Phi Kappa Tau fraternity. While at Cornell, he “almost” met his future wife, Peggy at a church dance. He had seen her and was finally about to meet her when curfew was called. He found her phone number two weeks later and asked her out. The rest was history. They were married for 56 years and had two children, Bill and Betsy. After graduating from Cornell in 1962, Bob signed on as an officer in the US Air Force. Bob and Peggy moved to Warner Robins, GA, where he was stationed. At the base, he was responsible for food service and held the unenviable position of mortuary officer. He served a tour in Vietnam. After returning from Vietnam, Bob and Peggy moved to Knoxville, Tennessee, where he managed student cafeterias at the University of Tennessee and earned an M.B.A. He enjoyed a decades long career as the director of food service at various universities around the country, including the Ohio State University, the College of William & Mary, the State University of New York at Stony Brook, and Northern Arizona University. He earned professional recognition for introducing new approaches to student dining, including short-order options, salad bars, vegetarian dishes, and his personal favorite, self-serve soft ice cream. He and Peggy moved to Corvallis in 1983 when Bob became the director of the College Inn at Oregon State University. While he managed the College Inn, he earned an M.Ed. from Oregon State University and quickly became a fan of Beaver athletics. Bob’s true passions, beside his family, included New York Yankees baseball, the outdoors, and volunteering to help others in the community. Bob was a continuously active Boy Scout leader since 1964.he was excited when his son was born because he would have his own scout. He served as Scoutmaster or Cub Master everywhere he lived. In 1984, he revitalized Troop 170 in Corvallis, serving as Scoutmaster for many years and remaining active with the troop after his retirement. Bob introduced countless boys to the joys of camping and nature. He took his scouts on adventures all over Oregon, from swimming and kayaking along the coast to hiking, skiing, and snowshoeing in the Cascade Mountains. He also led scout trips to Maine, New Hampshire, Virginia, New Mexico, and Minnesota. He believed that every boy he met was a potential Eagle Scout. Over the years, he mentored more than 50 Eagle Scouts. In 1990, he was awarded the Silver Beaver Award by the Oregon Trail Council of the Boy Scouts of America, in recognition of his exceptional character and distinguished service. Bob was also an active member of Kiwanis, serving as a charter member and president of the local Sunrisers Club, organizing fund-raising drives for local youth activities He also held the office of Kiwanis Division 72 Lieutenant Governor three separate times. After his retirement from the College Inn, Bob became even more active in the community. Drawing on his business experience, Bob served as president of the local chapter of the Service Corps of Retired Executives (SCORE), where he mentored many aspiring small business owners. He coordinated the SMART Reading Program at Mountainview School for many years, which provided schoolchildren with access to reading mentors and gift books.. For this work, he received the Volunteer of the Year award in 2016. Bob was also involved at the Episcopal Church of the Good Samaritan, serving as an usher and lay reader. He was elected to the vestry multiple times and served as Senior Warden when asked. For many years, Bob also drove for the Benton County Dial-A-Bus and delivered Meals on Wheels. In 1999, he received the First Citizen Award from the City of Corvallis, recognizing his many contributions of service to the community. In 2007, he received the Rotary Meritorious Service Award for his work to enrich the lives of area children. Bob was known for his warm and ready smile, kind heart, and ever-present sense of humor. He was proud of all the young people in his life, especially his children and grandchildren, and took great joy in helping them grow and develop. He is survived by his beloved wife, Peggy; his “favorite” brother, Dick; his two children, Bill (Jen) and Betsy (Bob) Cooper; and his four grandchildren, Raine, Ben, Ezra, and Joe. Donations in memory of Bob are encouraged for the Oregon Trail Council Boy Scouts of America, Cornell University School of Hotel Administration, or the charity of your choice. Service will be held at St. Alban’s Episcopal Church, Albany by invitation on March 20 at 1 pm. The service will be streamed on Facebook at https://www.facebook.com/stalbans.albany.oregon/

The family of Robert Bruce Bernhard created this Life Tributes page to make it easy to share your memories.