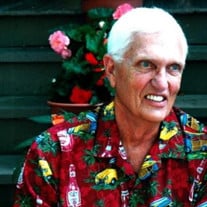 Richard (Dick) Delwin Lilja, age 86, passed away on November 12, 2021, after enduring challenging illnesses during his last years. He will be remembered as a hardworking, kind, and loving gentleman. Born January 4, 1935, in Forman, North Dakota, to Wilmer and Margaret Lilja. Dick lived most of his life in Oregon. He attended Catholic grade schools, then graduated from Benson High School in Portland. As a teenager and Boy Scout, Dick loved his summer jobs at Ripplebrook Ranger Station on the Mt. Hood National Forest. His love of the outdoors led him to work his way though OSC's Forestry School, earning degrees in Forest Products and Business. Dick served eight years in the Oregon Air National Guard while pursuing his higher education. Upon returning from his military service, Dick met his future wife, Irene, who was attending college. They were happily married for 60 years. He dearly loved his family and kept a picture in his wallet of his three young children on an Easter morning. Dick's professional career with USFS spanned 30 years on the Mt. Hood, Willamette, Deschutes and Siuslaw national forests. He was especially proud of his involvement in the Cape Pepetua's Visitor Center on the Oregon coast. Dick and Irene hiked 37 trails to write their popular book, "Siuslaw Forest Hikes, A guide to Oregon's Central Coast Range Hikes." Retirement offered new challenges. Dick planted and harvested a four-acre vineyard while managing a 14-acre one. He also grew a large vegetable garden and orchard. Dick consulted for 10 years, designing and building trails for OSU's School of Forestry McDonald Forest, for Corvallis Parks and Rec and county parks. Touring Europe on a vespa for a few months after college graduation inspired Dick to become a life-long traveler with his wife explored the U.S. and world. Lastly, eight more years were spent wintering in Green Valley, Arizona, exploring southwestern culture. Dick took up skiing on Mt. Hood while in high school. He later became a ski patrol member at Willamette Pass where he taught his family to ski. He hiked and climbed a few mountains, most notably the west slope of Mt. Hood. Many summers were spent on Fern Ridge Reservoir sail racing with his buddies and as a member of Fleet 93. The last sailboat he owned with Irene was a "Shearwater" moored on Vancouver Island, B.C. Volunteering was important to Dick. He helped build three Habitat for Humanity homes and worked at the store; drove for Dial-A-Bus; welcomed foreign students through Crossroads and lastly worked with Irene at the Wild Goose Store on the Finley Wildlife Refuge. Dick leaves behind his beloved wife, Irene, son, Douglas (Shelly), sister, Mary Lou, of San Jose, California, brother-in-law, Cliff of Olympia, Washington, nieces and nephews. He was predeceased by his children, Stephen and Catherine, brother, Bill, and parents. Special thanks for the compassionate care to Regent Count Senior Living, Samaritan Evergreen Hospice and Hospital. A memorial service will be held next summer. Please send condolences to the family at www.mchenryfuneralhome.com

Richard (Dick) Delwin Lilja, age 86, passed away on November 12, 2021, after enduring challenging illnesses during his last years. He will be remembered as a hardworking, kind, and loving gentleman. Born January 4, 1935, in Forman, North Dakota,... View Obituary & Service Information

The family of Richard Delwin Lilja created this Life Tributes page to make it easy to share your memories.