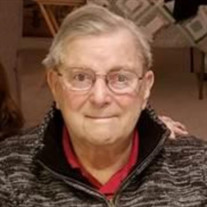 Richard (Dick) Stanley Hansler, 91, went to be with the Lord on Thursday, July 16, 2020 at Regent Court Senior Living in Corvallis, OR. Dick was born on December 8, 1928 in Tacoma, Washington to Mike and Mary Hansler. He loved all the things the outdoors provided – backpacking, hiking, skiing, hunting, berry picking and trout fishing in the mountains of Washington. Dick was not a stranger to mischief and high risk activities – much to the chagrin of his mother. Dick attended school in Tacoma, WA and graduated from Lincoln High School in 1946. At the age of 14, Dick lived 5 months in Corvallis, OR where his dad was sent to help build Adair Village. He attended the University of Washington and received Bachelor of Science degrees in Industrial and Chemical Engineering in 1955. He served in the US Navy and was honorably discharged. After college and military service, Dick was employed with Mobil Oil Corporation starting as a Junior Design Engineer and eventually progressing to being the Refinery Manager of Mobil Oil Refinery in El Palito, Venezuela. Dick met Mary Ann Nebiker while in Venezuela. He decided that Mary Ann would make a suitable wife as she offered to paddle him around Lake Pato in the Andes in Venezuela while he fished, and they were married on June 25, 1963 in the US Territory of Puerto Rico. Their daughters, Judy and Patty, were born in Venezuela. The work with Mobil Oil provided opportunities for the family to live in Connecticut, Singapore and New Jersey. Dick committed his life to Christ while in Singapore and as a result has left a wonderful faith legacy to his children, grandchildren and great grandchild. Dick had an incredible servant heart and was always the first to help someone in need. He and Mary Ann enjoyed being part of several church communities and took a few mission trips overseas. He had a wonderful sense of humor, loved to share “fish tales” with his siblings and cousins, and his engineering brain led him to design and create many things like an underwater camera. He loved to play cribbage and played cribbage with his family into his last days – and still delighted in winning especially if he was able to “skunk” his opponent. Dick was preceded in death by his sister, Nancy Hansler; his son Michael Hansler; and his parents Mike and Mary Hansler. He is survived by his wife, Mary Ann Hansler of Corvallis; daughters Judy (Marc) Erickson of Fort Atkinson, WI and Patty (Dave) Jackson of Corvallis; grandchildren Katie (Tom) Diehl, Marc Erickson, Erin Erickson, Emily (Alex) Gigoux, Derek Jackson, Benjamin Jackson; great grandson Rory Diehl; siblings Ida Wilks of Oregon, Jerry Hansler of New Jersey, Grace Merrill of California and Tom Hansler of Washington. At this time no memorial service is being planned due to restrictions with gatherings of large groups.

Richard (Dick) Stanley Hansler, 91, went to be with the Lord on Thursday, July 16, 2020 at Regent Court Senior Living in Corvallis, OR. Dick was born on December 8, 1928 in Tacoma, Washington to Mike and Mary Hansler. He loved all the things... View Obituary & Service Information

The family of Richard Stanley Hansler created this Life Tributes page to make it easy to share your memories.