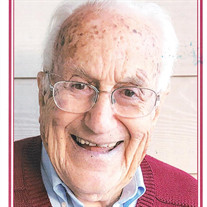 Steve Besse, one of Oregon’s few remaining D-Day veterans, died peacefully of natural causes, surrounded by his family at his home in Corvallis. Steve was born in Cheyenne, Wyoming, and move to Corvallis when he was two. He attended Corvallis schools graduating from Corvallis High in 1937. After graduation, Steve enrolled at Oregon Agricultural College (OSU) and it was there,during his senior year, that he met and fell in love with his sweetheart for life, a bright,vivacious sophomore co-ed from Albany - Dyna (Virginia) Mornhinweg. World War II was underway and in 1942, Steve enlisted in the Navy where he received his commission at Columbia University. Two years later, on June 6, 1944, Steve, at age24, was the Executive Officer and second in command on the Landing Craft Infantry(LCI) 420 that was in the first wave of landings on Omaha Beach, Normandy. On that day and for several days thereafter, the LCI 420 made multiple landings under heavy fire from the Germans, delivering over 2,500 troops onto the beach. Seventy-one years later, at age 95, Steve was inducted into the French Legion of Honor as a“chevalier”(knight) for his part in liberating France from the Nazis. Though separated by war, Steve and Dyna continued their relationship through letters. Just months after he returned to the states in 1945, Steve proposed to Dyna and they were married June 24, 1945 in the First United Methodist Church of Albany. Later that year, Steve was honorably discharged from the Navy and secured a position as International Sales Manager for Ferry Morse Seed Co. in Palo Alto where he worked for 17 years – a position that sometimes included foreign travel. During these years, Steve caught the “travel bug” that led him and Dyna to travel the world over until they were in their early 80’s. Ultimately, Steve traveled to over 65 countries and every continent in the world - except Antarctica. While in Berkley, the couple’s first daughter, Marilyn, was born. In following years, daughters, Susan and Joyce, were born. The family has many fond memories of livingthe suburban life of the 1950’s in a “cookie-cutter” neighborhood bursting with young families in Sunnyvale, California. In 1962, Steve accepted a position as OSU County Extension Agent for MalheurCounty and the family moved to Ontario, Oregon where Steve worked with potatoand onion growers for six years. The family moved to Eugene in 1968 when Steve was named Chairman Agent for theLane County Extension Service. Ten years later, with daughters grown, Steve and Dyna returned to Corvallis where their life together had started and where Steve served as Associate Director of International Agriculture for the OSU College of Agriculture. In “retirement”, Steve and Dyna worked on several short-term agricultural assignments for the OSU/VOCA program in Poland, Belarus and Tunisia. In addition,the couple led Rural Route Tours in Europe, New Zealand and Australia with a focus onagriculture, and two wildlife-viewing tours to Kenya. For many decades, Steve, Dyna and their children delighted in the wonders of the Oregon coast – clamming, crabbing, beach combing, fishing and exploring tide pools. Their delight increased with the addition of grandchildren and in time the shared ownership of a condo in Newport where they enjoyed mini vacations year-round. There are no words to adequately describe Steve’s insatiable curiosity, energy and absolute zest for life. As a life-long gardener, he was most happy when he had some good soil in which to dig. As an avid fisherman, trout or steelhead fishing in Oregon or salmon fishing in Alaska couldn’t be beat. Steve and Dyna found great joy in sharingin the lives of their three daughters and their families. As “Daddy, Steve, Grandpa or Grampa Besse”, he inspired his family to “live life large”. Eleanor Roosevelt said; “The purpose of life is to live it, to taste each experience to the utmost, to reach out eagerly and without fear for newer and richer experiences.” His family, and many others in the world, were blessed to witness Steve doing just that -living life large for the 100+ years he was granted to be on this earth.Steve was preceded in death by his brother, Billy, (aged 13) who died of rheumatic fever and by his parents Ralph Stephen (aged 92) and Helen Margaret, (aged 97). He is survived by Dyna, his wife of 75 years, daughters: Marilyn (Paul) Karr,Sue (Lyle) Marchant, and Joyce (Doug) Jost; grand children: Ryan (Lea) Karr, Emily Karr, Dawson Marchant and Caitlin Jost, and great grandchildren Stella and Felix Karr. A private interment has been held at Oak Lawn Memorial Park, Corvallis. A celebration of life will be held when such gatherings are safe. The family wishes to convey their heartfelt thanks to ComForCare and Lumina Hospice who were “heaven-sent angels when they were most needed.” Remembrance gifts may be made to: Friends of the Corvallis-Benton County Library or the OSU Foundation - Director's Fund for Excellence in Extension. For details on gifting please call (541) 757-8141 or sign the guest book below.

Steve Besse, one of Oregon&#8217;s few remaining D-Day veterans, died peacefully of natural causes, surrounded by his family at his home in Corvallis. Steve was born in Cheyenne, Wyoming, and move to Corvallis when he was two. He attended Corvallis... View Obituary & Service Information

The family of Ralph Stephen Besse created this Life Tributes page to make it easy to share your memories.