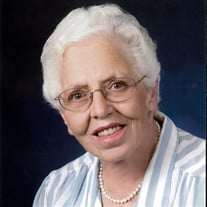 Phyllis Irene (Music) Johnson, 83, went to be with her Lord on Wednesday, April 17, 2019. Her death was a result of complications from a fall. Phyllis loved to tell the story of how she was born in a “chicken house” near Cheyenne, Wyoming as the second of three children born to Guy Clifford and Esther Ann (Leonard) Music. The family actually lived in the home before it became a chicken house much later. When Phyllis was 9 years old, her family moved to Aumsville, Oregon so her father could start the Guy Music Logging Co. She attended Aumsville Primary School and Cascade Union High School, graduating in 1954. She married George Magarrell in 1953 and they lived in Tacoma, Washington while he finished his service in the Air Force. They lived in the Stayton area for many years and had two children, Randall Dean Magarrell and Marsha Lynn (Magarrell) Lincoln. In 1966 they made Albany, Oregon their home. Extended family gatherings were the highlights of these years—camping, hunting, holiday celebrations and Sunday dinners. Their marriage ended in 1975. Phyllis married Reed Johnson, “the love of her life,” in 1981. The couple had a small farm in Buena Vista, Oregon and Phyllis called it her “little corner of heaven.” She was never happier than when she was digging in the dirt and growing fruit, vegetables and flowers. Phyllis and Reed owned a deep sea fishing boat and loved taking friends and family ocean fishing. They could really “cut a rug” and enjoyed going dancing. Phyllis was an avid card player, just like her dad. She did impeccable embroidery and her family is not quite sure what to do with all the pillow cases and tea towels—but they are beautiful treasures. Phyllis had the gift of hospitality and everyone enjoyed a meal at her table. Phyllis had an incredible work ethic and held many jobs throughout her life. She was a school bus driver, restaurant cook, dispatcher and a secretary at Teledyne Wah Chang for 20 years before finally retiring in 1996. Phyllis is survived by her son, Randall (Sherrie) Magarrell of Keizer, daughter Marsha (Mark) Lincoln of Corvallis and her sister, Catherine Kelly of Gold Beach, Oregon. Her surviving granddaughters, Chelsea, Danae, and Kaley as well as four great-grandchildren all affectionately call her “Bammy.” She was preceded in death by her husband Reed in 2004, her brother-in-law Don Kelly in 2008 and her brother Dale Music in 2015. Phyllis will be interred at Willamette Memorial Cemetery in Albany. Her memorial service will be at 4:00 p.m., Saturday, May 4, 2019 at Grant Avenue Baptist Church, 1625 NW Grant Ave. in Corvallis. In lieu of flowers, please consider donating to Senior Ministries at Grant Avenue Baptist Church or the Alzheimer’s Association www.act.alz.org.

Phyllis Irene (Music) Johnson, 83, went to be with her Lord on Wednesday, April 17, 2019. Her death was a result of complications from a fall. Phyllis loved to tell the story of how she was born in a &#8220;chicken house&#8221; near Cheyenne,... View Obituary & Service Information

The family of Phyllis Irene Johnson created this Life Tributes page to make it easy to share your memories.