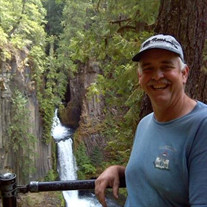 Peter James Neuman of Philomath died on Friday, August 9, 2019 in Benton County. He was born in Corvallis, Oregon to Otto George and Elizabeth Ann Neuman on March 10, 1960. He was the eighth of eleven children. He grew up on Gellatly Way in Philomath until his family moved to a farmhouse on Highway 20 (also in Philomath), where they raised dairy cows and sold milk locally. He graduated from Philomath High School in 1978. Peter married the love of his life Nancy Sue York on November 21, 1987 at Kings Circle Assembly of God in Corvallis, OR. A few years later, their son Justin was born and then a couple of years later, they had their daughter Vicki. After high school Peter went to work for Neuman Quarry and Excavating, where he primarily delivered rock, along with running quarry machinery. He worked with the family business for about 10 years before the business was sold and he then continued driving rock truck working for S2F, which later became Morse Brothers, and then Knife River. He went to work for Benton County in 2001, joining the road maintenance crew. His hobbies included deer hunting, fishing, puzzle building, watching NCIS, and playing cribbage with the guys from work. He was a third-degree Knight of Columbus. He was a loving husband, father, brother and son. He is survived by his wife of 31 years, Nancy, of Philomath; son Justin Neuman (daughter in-law Erin)and daughter Vicki Neuman of Philomath; mother Elizabeth A. Neuman of Philomath; brothers David,Jerry, and Paul Neuman of Philomath; sisters Marjorie Morford, Susan Neuman, and Jacqueline Robinson of Philomath and Mary Grill of Albany. He was preceded in death by his father Otto G. Neuman, brothers Tim and Tony, and sister Anna. A visitation will be from 3:00 to 5:00 p.m. on Monday, August 19, 2019 at McHenry Funeral Home in Corvallis. A Memorial Service will be held at 1:00 p.m. on Tuesday, August 20, 2019 at Kings Circle Assembly of God (2110 NW Circle Blvd. Corvallis, OR 97330), followed by a graveside gathering at Mt. Union Cemetery in Philomath.

Peter James Neuman of Philomath died on Friday, August 9, 2019 in Benton County. He was born in Corvallis, Oregon to Otto George and Elizabeth Ann Neuman on March 10, 1960. He was the eighth of eleven children. He grew up on Gellatly Way in... View Obituary & Service Information

The family of Peter James Neuman created this Life Tributes page to make it easy to share your memories.