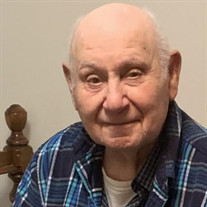 Paul Emil “Butch” Rohner September 5, 1925 – July 5, 2021 Paul Emil “Butch” Rohner, age 95, of Florence, Oregon, was called home to his Heavenly Father on July 5, 2021, following a long battle with dementia. Butch was born in Corvallis, Oregon, on September 5, 1925, to Joseph Emil “Doc” Rohner and Hedwig Marie Steger Rohner, both immigrants of Switzerland. Butch was the youngest of eight children. He attended school in Corvallis throughout his primary and elementary years, but left during the 8th-grade in order to gain employment and financially support his family. With the arrival of WWII in the early 1940’s, Butch joined the Army and was active in the Pacific – even crossing paths with his older brother Joseph whilst in the Phillipines. Following the war, he returned to Oregon where he met the love of his life, Patsy Jean Bails; they married on October 18, 1952. Soon thereafter, the couple relocated to Florence, Oregon, where Butch began his 33-year career at Central Lincoln PUD, working his way up through the ranks. He retired from his Serviceman position in 1988 to further pursue his hobbies… fishing, hunting, gardening, and an annual road trip to Reno, Nevada. Never one to refuse a sweet treat, Butch enjoyed sharing his Almond Roca and Snickers snack-sized candy bars with his grandchildren – and seldom missed a morning coffee with his buddies at McDonald’s. Butch was preceded in death by his loving wife in 2008 and was the last surviving of his seven siblings. Butch is survived by his three children (Patricia, Paul, and Phillip), two grandchildren (Tara and Duke), and three great-grandchildren (Dominic, Mason, and Lauren). At his request, there will be no funeral or memorial service following Butch’s cremation.

The family of Paul Emil Rohner created this Life Tributes page to make it easy to share your memories.