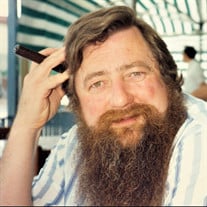 Paul Cull, Ph.D. July 11, 1943-December 17, 2019 He was a neighborhood icon with flowing red beard and Hawaiian shirts and shorts, even in winter. A student once asked a barista at the old Beanery, where he rode his bicycle for coffee every... View Obituary & Service Information

The family of Paul P. Cull PhD created this Life Tributes page to make it easy to share your memories.