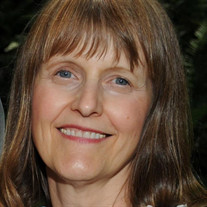 Pamela Louise Strawn died December 26, 2020, at home surrounded by her family that she loved so dearly. Pam was born June 27, 1953, in Port Clinton, Ohio, to Richard and Mary Lou Semon. She was the second of four children. If you knew Pam,... View Obituary & Service Information

The family of Pamela Louise Strawn created this Life Tributes page to make it easy to share your memories.