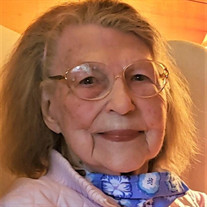 Osa Maude Martinson (Newman) March 12, 1927 - July 28, 2021 Osa Martinson passed away peacefully at home of natural causes, Wednesday, July 28th. Her room filled with roses from her garden and after recent visits from many of her family, she drifted off to sleep and in the early morning hours she stepped into the celebration awaiting her in Heaven. Born in Nehalem, Oregon to J. Harold And V. Faye Newman, Osa grew up with her two sisters and her brother in Tillamook, Oregon. It was there that Osa embraced a life of devotion to family, service to others with grace and developed a flare for fun adventures. She spoke often of her parents having an extra place setting at the table during the 1930’s for those in need. How during WWII her father was the black-out warden patrolling the streets of Tillamook, all the while Osa, her siblings and friends organized teen dances for the military service personnel from the Tillamook Blimp base. Upon graduating from Tillamook High School, she enrolled at Oregon State College (Oregon State University). Known by their first and middle names growing up, she and her friends decided once in college, they needed to drop their middle names, join sororities and embrace college life. She became a member of the Delta Gamma sorority and soon met her future husband Norman "Norm" H. Martinson who was just back from serving with the USAAF overseas. A deep love of everything Oregon State and Beaver Nation followed them throughout their lifetime together. They married in 1948 and after graduation, they found themselves in Hillsboro, Oregon where Norm taught and coached and the first four of their six children were born. In 1958 the family moved to Corvallis after Norm accepted a teaching position at Oregon State within the Men’s Physical Education Department. The family then made their final move (or so they thought) to Corvallis. Once settled, child number five was welcomed into the family. In 1964 an opportunity of a lifetime was presented to Norm, to teach for one year in Bangkok, Thailand by the Fulbright Foundation. With a nod from Osa a new adventure began. Her passport bares a photo of her and all 5 children signifying where mom went, so went the kids. As the children were all enrolled in school, Osa found time to work at the American Embassy teaching English as a Second Language to Thai students. Partners in everything they did and wanting the family to experience Thai culture, she and Norm hosted countless parties for American Peace Corps volunteers, Thai students, their families and explored Thailand. Waterskiing in the Gulf of Thailand, visiting local markets and temples became the family’s weekend adventures. When their year in Thailand came to a close, their adventure wasn’t over as the family took the long way home. They traveled through the Middle East, drove and camped their way through Europe and up to the Scandinavian countries. All the while Osa helped navigate and manage life on the road, camping with their five children while Norm drove. After a short stay in London, their VW Micro Bus shipped home, it was time for everyone to head back to Corvallis. Once settled back into Oregon life, their much loved 6th child was born. Partners in life and partners in business, Osa and Norm opened O&N Fabrics which flourished under Osa’s management. Helping manage rentals and small apartments Norm built in the summer soon came easy to Osa as she took all new opportunities in stride. Later on the FV Louise was purchased and Osa embraced the opportunity as long as she wasn’t expected to steer nor be the puller during the fishing seasons. Short jaunts in Yaquina Bay, dockside gatherings and fish BBQs were more Osa’s style. During the 80’s/90’s Osa also worked part-time in the finance office at Oregon State, keeping in touch with generations of Beavers. Osa also led a life of service. She was a Cub Scout and Blue Bird leader for her children. She joined the Corvallis P.E.O. Chapter CL and maintained membership for over 40 years and was a past President. In 1973 she was President of the Benton Co. Cancer Society heading up their annual fundraising crusade. She was a member and in 1980 President of the OSU Folk Club and a long time volunteer of the OSU Thrift Shop. An avid reader, she was a member of the OSU Book Club for over 30 years and helped organize the annual trip to the Sylvia Beach Hotel in Newport. Osa loved her sorority and continued to assist with events and was honored with a White Silk Rose signifying 75 years of service by the Delta Gamma Fraternal organization this past January. She also never forgot her foundations which began in Tillamook by becoming a member of the Tillamook Pioneer Museum. Osa's life was well lived with family gatherings, annual holiday parties, OSU sports, afternoon teas, children & grandchildren’s events, cruises, trips to far off lands, catching up with beloved family members, neighbors and long time friends. She was preceded in death by her parents, her beloved husband Norm, her two sisters, and sisters and brothers-in-law. She is survived by her brother Merrill, her children and their families: Karen (Tom) Peck, Steve (Marie Louise) Martinson, Ann (Lanny) Schreiner, Patty Martinson-Louisiana, Jamie (Val) Martinson, Molle (Eric) Johnson. 19 grandchildren, 7 great-grandchildren, her nieces and nephews and their families. All of which she loved with all her heart. The family wishes to thank Lumina Hospice and Palliative Care along with Osa’s longtime caregivers from Mennonite Village who assisted in helping Osa be at home this past year. Osa’s family will hold a Celebration of Life at a later date in Newport and in lieu of flowers, Osa’s wish was for you to give to a local charity of your choice. You may leave condolences at: www.mchenryfuneralhome.com

Osa Maude Martinson (Newman) March 12, 1927 - July 28, 2021 Osa Martinson passed away peacefully at home of natural causes, Wednesday, July 28th. Her room filled with roses from her garden and after recent visits from many of her family, she... View Obituary & Service Information

The family of Osa Maude Martinson created this Life Tributes page to make it easy to share your memories.