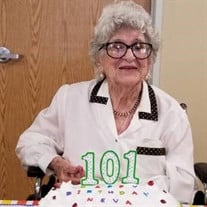 Neva Alice (Holloway-Sedlacek) Stueve Neva Alice Stueve passed away gracefully on May 21, 2019 surrounded by family at the age of 101. Neva lived life on her terms, with grace and ease, strength and beauty in all the adversities that came her way. Born to William and Doris Holloway in Haddem, Kansas on September 4, 1917, she was the 4th of 6 children. Her family had moved from Arkansas to Kansas in a covered wagon to live off the land and farm in Kansas. Neva learned resiliency at a young age when her father became widowed upon her mother’s death from scarlet fever in 1922. Neva remained tightly bonded to all of her siblings her entire life. In 1935, Neva married Victor Sedlacek. Their growing family moved from Kansas to Corvallis in 1947. Having children “meant everything in the world” to her as she shared many times over. Neva’s sparkling charm and kindness to everyone helped her excel as a waitress. She felt fortunate for her many years at Wagner’s and Burton’s Sunnybrook Restaurant here in Corvallis. Neva had to pick up the pieces of her broken heart when widowed in 1972 upon Victor’s unexpected death. Though her children were raised, the bonded family and Neva’s extended family of siblings helped her move forward with her life. Neva lost and found love a few times. She was able to find deep love once again and married Vince Stueve in 1985, where they had a great life of traveling, dancing and enjoying their families. Vince died in 1996. She loved the Stueve family as her own and remained very close to them until her passing. Neva loved her family and extended family and friends a great deal. She is remembered for her uncanny regard for detailed stories and connection to everyone around her. She never met someone who wasn’t a friend, and was never afraid to take a stand for what she believed to be right. While she was known as a hard worker, she always found ways to have fun. She stayed young by dancing, gardening, canning and quilting until she was 98 years old. She was faced with may losses and adversities, but quitting was never an option. Her family admired her strength and resilience to always keep moving forward amidst difficult situations. Neva is survived by three children, Doris Bishop, Milton (Debra) Sedlacek, Rex (JoAnne) Sedlacek, six grandchildren, ten great grandchildren, and one great-great grandchild. She was preceded in death by her daughter Loretta Millison in 2014, whom she dearly missed every day. Per Neva’s request, there will be no public service.

Neva Alice (Holloway-Sedlacek) Stueve Neva Alice Stueve passed away gracefully on May 21, 2019 surrounded by family at the age of 101. Neva lived life on her terms, with grace and ease, strength and beauty in all the adversities that came her... View Obituary & Service Information

The family of Neva Alice Stueve created this Life Tributes page to make it easy to share your memories.