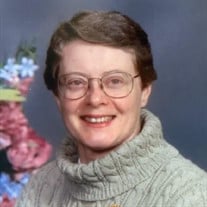 Nancy Smith Weber died on December 19, 2020. She was 77. Nancy was born in Ann Arbor, Michigan on March 12, 1943 to Alexander and Helen (Smith) Smith. She attended Ann Arbor schools and attended Ohio Wesleyan University in Delaware, Ohio for two years before transferring to the University of Michigan and earning a bachelor’s degree in Botany in 1965. She continued studying at Michigan earning a master’s degree in Botany in 1967 and a doctor of philosophy in Botany in 1971. On April 18, 1970 she married James (Jim) A. Weber in Ann Arbor. From 1971 to 1988 she worked in various capacities in botanical research for the University of Michigan Herbarium. In 1988, Nancy moved to Corvallis, Oregon when Jim accepted a position with the EPA laboratory. She joined the Oregon State Department of Forest Service in 1990 and worked as an Assistant Professor, Senior Research until 2000. She held a courtesy faculty position in the Department from 2000 to 2004 and was an Affiliate Facility member beginning in 2004. Nancy is survived by brother-in-law Michael Leo Weber and sister-in-law Frances Spivy- Weber of Sacramento, CA sister-in-law Karen Marie Weber of Santa Fe, NM and cousins Margaret (Smith) and Scott Arighi, Anne (Smith) Dowling, Dorothy (Smith) Martin and their families. Nancy enjoyed sharing her enthusiasm for botany and especially mycology. As a child she traveled extensively throughout western North America in conjunction with her father’s mushroom research. She tagged along on collecting trips beginning at age three. Nancy never lost interest in mushroom hunting and remembered trips not by scenic spots or tourist attractions but by special mushrooms found. While living in Oregon, she shared her experiences and knowledge by participating in mushroom hunting forays and making scientific presentations throughout western North America. Nancy was awarded the North American Mycological Association Award for Contribution to Amateur Mycology in 2007 for “more than 30 years of duty in the trenches of amateur mycology”. She was fondly known as the “mushroom lady” by many in the Corvallis community. Professional society memberships included the American Institute of Biological Sciences, Botanical Society of America, North American Truffling Society, Northwest Scientific Association, Oregon Mycological Society, Phi Beta Kappa, Society of Sigma Xi, American Women in Science, Native Plant Society of Oregon, Michigan Botanical Club, PEO chapters in Ann Arbor and Corvallis and life member of the North American Mycological Association and Mycological Society of America. Nancy was also an honorary member of the Michigan Mushrooms Hunter’s Club and the West Michigan Mycological Society. In lieu of flowers, contributions may be made to the Greenbelt Land Trust Inc, 101 SW Western Blvd, Corvallis, OR 97333, Linn Benton Food Share, 545 SW 2nd St, Corvallis, OR 97333, Oregon Chapter Nature Conservancy, 821 SE 14th Avenue, Portland, OR 97214, or the Mycological Society of America (Student travel/research funds), 2424 American Ln, Madison, WI 53704. A Corvallis memorial service will be scheduled at a later date. McHenry Funeral Home in Corvallis is in charge of arrangements. Please leave condolence messages for the family here on the website

The family of Nancy Jane Weber created this Life Tributes page to make it easy to share your memories.