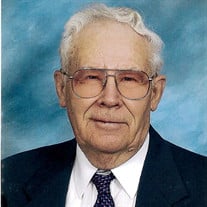 Moyle Harward was born May 1, 1922, in Aurora, Utah, to Orson Alfred Harward and Iva Peterson. He was the third child of nine siblings. The family moved from Aurora to Provo, Utah when Moyle was about five. He assisted his father in the dairy industry through his growing up years. In his free time, he enjoyed fishing and exploring the hills in Utah Valley. Moyle attended school in Provo, enlisting in the National Guard prior to his high school graduation. He finished his senior classes through correspondence while at boot camp, enabling him to graduate with his senior class. After his enlistment in the National Guard as a Technician at the beginning of World War II, Moyle eventually became a 1st Lt. in the U.S. Army. During this time, he married his high school sweetheart, Ada Taylor, on November 6, 1943, in Clovis, New Mexico. Moyle served in Pearl Harbor as a medic with the first wave to enter Hawaii following the attack on Pearl Harbor. He went on to serve in Nebraska, New Mexico, California, Virginia, Illinois and Texas. Moyle was the last known survivor of his Medical Corp at the age of 97. After the war, Moyle began his college education at BYU under the GI Bill. He then continued on for his Master’s Degree at the University of Massachusetts in Agrostology before heading to North Carolina State for his PhD in Soil Chemistry. After accepting a position as Assistant Professor in the Agronomy Department at NC State, Moyle and his family, which now included four girls and his wife, moved to Oregon where he accepted a position as a Professor of Soil Science specializing in Clay Mineralogy at Oregon State University in 1955. Over the next few years, two more daughters were added to the family bringing the total to six girls, whom he fondly referred to as “My Girls.” Before his retirement from OSU, Moyle and his family moved to “the Farm” south of Philomath, where he began raising Christmas trees. After his retirement in 1982, he devoted his time to raising Christmas trees as his second career. After the death of his first wife in 1992, Moyle met E. Maxine Kropf. They were married on April 24, 1993, in Corvallis and had just celebrated their 26th wedding anniversary. Moyle’s hobbies included fishing, woodworking, camping, gardening, backpacking, reading and travel. Moyle passed away peacefully, surrounded by those who loved him on May 4, 2019 in Corvallis. His first wife, Ada Taylor; daughter, Susan (David Tucker); five siblings; two grandchildren; and two great-grandchildren preceded him in death. Survivors include his wife, E. Maxine (Kropf) Harward; Lee Ann (Jim Parker), Rosie (Phil Hagedorn), Karen (Von Taylor), Peggy (Reed Glasmann), Debbie (Terry Frazier); his siblings, Joyce (Roland), Verl, and Darrell; stepchildren, Larry Warfel (Margaret), Raymond Warfel (Sue), June (Bruce) Sturgill; 30 grandchildren; and numerous great and great-great-grandchildren. A viewing will be held from 5 to 7 p.m. on Wednesday, May 8, at McHenry Funeral Home located at 206 NW 5th St., Corvallis. The funeral service will be held at 11 a.m. on Friday, May 10, at the Suburban Christian Church, 2760 SW 53rd, Corvallis. Moyle was a member of Suburban Christian Church and Northwest Hills Community Church. In lieu of flowers, donations can be made to Along Side Ministries, 2830 W Northern Ave., Phoenix, AZ 85051.

Moyle Harward was born May 1, 1922, in Aurora, Utah, to Orson Alfred Harward and Iva Peterson. He was the third child of nine siblings. The family moved from Aurora to Provo, Utah when Moyle was about five. He assisted his father in the dairy... View Obituary & Service Information

The family of Moyle E. Harward created this Life Tributes page to make it easy to share your memories.