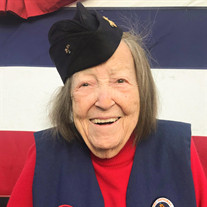 Mildred “Mickey” Maude Kalinauskas was born on February 22, 1924 to Arvel and Nellie Griffin in Oakesdale, Washington. She was the 4th of 5 children, her siblings being Josephine, Lloyd, Thomas “Harold”, and Janet. They eventually moved to Aberdeen, Washington, and then to Mulino, Oregon, where Mickey graduated from Molalla High School in 1942. During the onset of World War II, she worked as a secretary at the shipyards in Portland before enlisting into the Navy WAVES. She was stationed in Washington D.C. through the war. Some of Mickey’s fondest memories were of the friends she made and the time spent in Washington D.C. where she could experience big city life during a pivotal moment in world history. She was always proud of her service during the war, as is her family and friends. It was during her time in D.C. where she met her future husband, Guy Stamp, who was also in the Navy during WWII. They were married in Winnemucca, Nevada on October 29th, 1948, and moved to Boise, Idaho. On January 17th, 1956, they adopted their daughter, Kathie Sue. In 1963, the family moved to Corvallis, Oregon, where Mickey became a rare career woman, wife, and mother, working at OSU and then as a legal secretary for Robert Mix and other attorneys in town. On May 17th, 1980, Kathie married Mark Hopkins, and Mickey and Guy moved from just outside of Corvallis into town. A few years later, she and Guy were divorced, and on May 25th, 1985, Mickey remarried William “Bill” Kalinauskas. She continued to work, but they traveled as well, taking long road trips across the country for Moose events and more. In October 13th, 1986 and June 7th, 1989, Mickey’s granddaughters were born, Lisa and Karen. She was an active member of the Women of the Moose as Deputy Grand Regent from 1982-83, and participated with other organizations such as Cascade Seafarers, American Legion, American Legion Auxiliary, and volunteered at The Cat’s Meow (Heartland Humane Society Thrift Store) for at least 15 years. Her favorite thing of all was her family, and was excited when Karen was married to Decker Cleveland on December 16th, 2016. She also loved her extended family, and loved visits from her nieces and their children. She loved to shop, to go out to eat, to do arts and crafts such as embroidery, knitting and sewing, and creating and collecting bears and dolls. She adored doing things with her daughter and granddaughters, and especially loved her special pets over the years, Clara, Sgt Tibbs, Nikki, Snookie, and Peanuts (and her great-granddogs, Captain and Addie). She also really loved to have her nails painted bright red, and never forgot a compliment! Mickey Kalinauskas went to Heaven on January 29th, 2019 surrounded by her beloved family. She was 94 years old. She will be forever loved and missed by everyone who knew her. Services will be held on February 8th, 2019 at McHenry’s Funeral Home, and she will be interred at Willamette National Cemetery at a later date. In lieu of flowers, please send donations to Heartland Humane Society in Corvallis, Oregon.

The family of Mildred Maude Kalinauskas created this Life Tributes page to make it easy to share your memories.