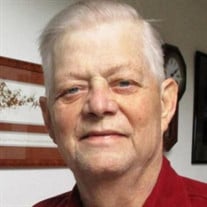 Mike was the fifth of six children - 4 boys and 2 girls born in Indianapolis, Indiana to Paul and Geraldine Scalf. His family moved west several times, where work could be found, eventually settling in Riverside, California. He married his high school sweetheart, Constance Fetskos, on April 25, 1970 and six days later deployed to his first duty station as a Navy radioman in the Philippine Islands. Later he was assigned to the USS Jason that took him from San Diego to Japan and Hong Kong and back. After serving his four years in the Navy, he graduated from California State University at San Diego with a B.A. in History and a minor in Geography. In 1978, he received his teaching certificate prior to moving with his wife and daughter, Melissa, to Corvallis, for potential employment opportunities. Mike served several schools as a substitute teacher for several years in Corvallis, Lebanon and Albany school districts. His first full time employment was at the Farm Home working with special education students. He did submit an application for "Teacher in Space" but was not chosen to join the astronauts on the fatal Challenger mission. To continue in this field of education, he then obtained a Master of Science in Education with a Teaching endorsement in Learning Disabilities/Handicapped Learner in 1987 from Western Oregon State College. When the Juvenile Detention Center opened in Albany Mike was hired as their first teacher for those children, teaching all ages as young as 9 to 18 years old, all levels of learning, assisting them to academically achieve more than they had in their past, which gave Mike great satisfaction. He as always pleased whenever meeting his former students from his various schools, when they would share their success with him. After retirement the American Legion became a second home to him, acting as an officer in the Lebanon Post 51, volunteering for many of their programs and activities for children including Chairman for Boys State, the Oratorical Scholarship Contest, and the Law Enforcement Career Camp. It was his honor to accompany Dick May, a World War II veteran, on an Honor Flight to Washington D.C. to see the monuments and celebrate the Greatest Generation. He and Connie then took her father to D.C. to honor his World War II and 28 year military service. All who knew Mike knew how much he loved his family and friends, enjoyed his sense of humor, his love of music, his eagerness to always educate and inform, his compassion, generosity and consideration of others, Preceding Mike in death were his dad and mom; sisters Sharon Roller and Karen Carrell, and brother Ronald. Those who remember Mike now are wife of 50 years, Connie; daughter, Melissa; brother Paul Scalf of Riverside, California and Dempsey Scalf of Port Neches, Texas. In 1992, Mike and Connie's dream home, a dome on a hill overlooking the valley, was completed and he often said that he lived in Paradise…. He truly is now. Please leave condolences for the family at www.mchenryfuneralhome.com

Mike was the fifth of six children - 4 boys and 2 girls born in Indianapolis, Indiana to Paul and Geraldine Scalf. His family moved west several times, where work could be found, eventually settling in Riverside, California. He married his... View Obituary & Service Information

The family of Michael Allen Scalf created this Life Tributes page to make it easy to share your memories.