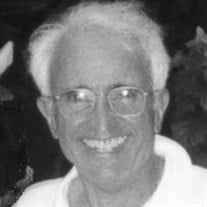 March 26, 1932 – May 7, 2020 Michael George Maksud was born on March 26 th , 1932 to George and Rachel Maksud in Chicago, Illinois. Michael (Mike) graduated from Lane Tech High School in Chicago, IL. He received a full athletic scholarship to play collegiate baseball at the University of Illinois at Champagne-Urbana, where he received his undergraduate degree. In 2000, he was inducted into the U of I Baseball Hall of Fame as a 1950-52 player and 1959-65 coach. He then completed his Master’s degree from Syracuse University and earned his Ph.D. from Michigan State University. He began his professional career as Chairperson of the Department of Physical Education at the University of Wisconsin-Milwaukee, Professor and Director of the Exercise Physiology Laboratory, and Associate Dean of Academic Programs of the UW-Milwaukee Graduate School. Michael’s daughters, Michelle and Dawn were through his marriage to Ann Azizian in 1959. Following their divorce, he took a position as Dean of the College of Health and Human Performance at Oregon State University (OSU) in 1980. On August 28 th , 1982 Michael and Shari were married at the Corvallis Arts Center, and his family grew to include his daughter, Deon and son, Thaddius JR O’Brien. Dr. Michael Maksud’s passion and drive for his profession, students and the University were evidenced by retiring as Dean at OSU following a 15-year tenure. He published over 85 articles and received numerous honors and awards for his scholarly work and teaching accomplishments. He served on several professional boards and traveled the world to collaborate with fellow colleagues. The pinnacle of his professional career was being honored with the OSU Department of Kinesiology Professional Achievement Award in 2009. Both Mike and Shari always had an open door to their home for family, friends and OSU students from around the world. There was always room at their table on any given holiday. Mike’s love for steelhead and salmon fishing and crabbing along the Oregon coast was tastefully enjoyed by many in their sphere of family and friends. He was an all-around athlete and loyal sports fan. You could find both he and Shari at nearly every OSU Beaver’s baseball, football, and basketball game with their spirit wear on. Staying true to his Chicago roots, he remained a loyal Cubbies fan. Mike believed in giving back to his community through serving on various boards to include: Good Samaratan Hospital and The Boys and Girls Club of Corvallis, where both he and Shari were involved. Most importantly, “Papa Mike” loved spending time with his grandchildren, both in Oregon and Wisconsin. Whether it was reading to them, watching their sports and activities or just giving their parents a break, he did it joyfully and with pride. Mike was preceded in death by his beloved wife, Shari Maksud, son, Thaddius JR O’Brien, brother, Samuel Maksud and brother-in-law, Skip Cello. He is survived by his daughters, Michelle Baylerian (Tom), Dawn Sagrillo (Jon) and Deon O’Brien Merten (Eric); his brother, Thomas Maksud and sister-in-law Elizabeth Maksud, sisters, Frances (Maksud) Cello, Delores (Maksud) Enwia, brother-in-law John Enwia, sister-in-law Patti Dixon Crisler and brother-in-law Allan Crisler; nephews, Craig, Jeffrey, Steven and Christopher Maksud, Paul and Mark Enwia; nieces Sandy (Cello) Lang, Cindy (Cello) Ontaneda, Kimberly (Maksud) Keleita, Christine and Cathy Maksud, Casey (Crisler) Davis; grandchildren: Marissa, Megan, Christopher, Drew, Alexae, Olivia, Solomon, Nicholas, Elizabeth and Isabelle. A viewing will take place at McHenry Funeral Home on Tuesday, May 12th from 10am to 11am. Due to COVID-19 restrictions, a private family graveside funeral will be held on Tuesday, May 12th at St. Mary's Cemetery. Memorial contributions can be made in Mike’s name to: The George and Rachel Maksud Fellowship in Exercise Physiology at OSU or The Boy's and Girl's Club of Corvallis.

The family of Michael George Maksud created this Life Tributes page to make it easy to share your memories.